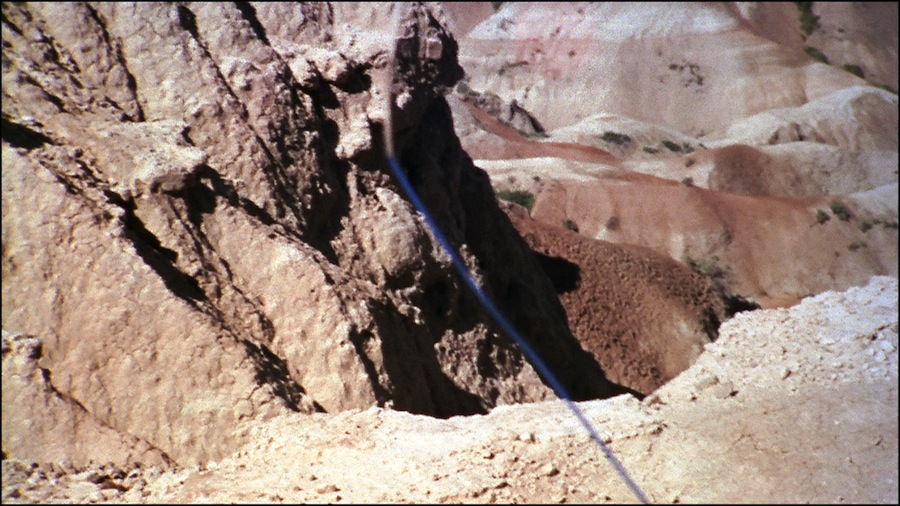 Did filmmaker Ben Russell know that, in the Museum of Contemporary Art, his new 16mm film, titled “Trypps #7 (Badlands),” would be shown in a gallery directly below Robert Smithson’s 16mm film “Spiral Jetty,” from 1970? Whether the answer is yes, that Russell intentionally played with Smithson’s proximity, or no, that the pairing is a happy curatorial coincidence, the two artworks engage each other in a call-and-response separated by forty years and a thin ceiling/floor. The concurrent showing of Smithson’s old film and the appearance of his legacy in the work of newer artists underscores that, for object makers, Smithson is the current ruling father (not Warhol or Beuys), and that this first decade of the new century is strikingly similar to the late-1960s, from our relationship to nature to continued civil rights struggles to a flourishing counter-culture. 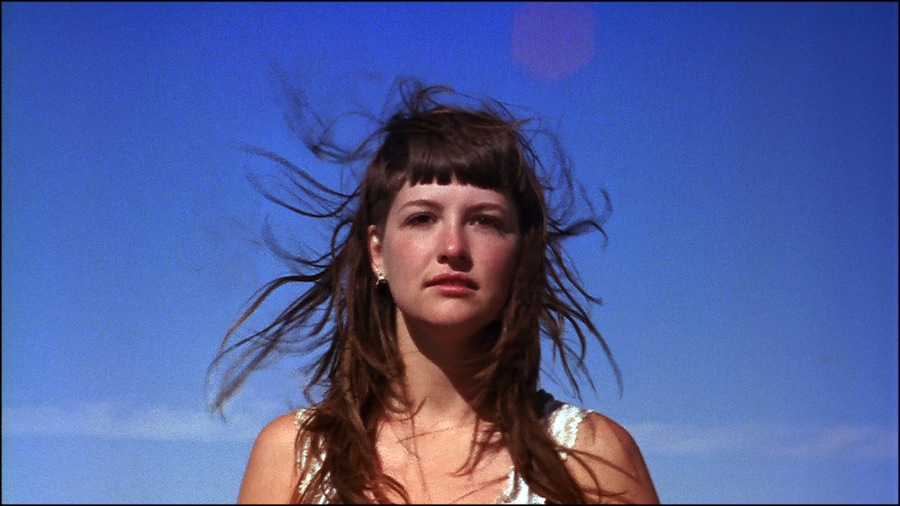 Russell’s new film is the seventh in a series called “Trypps.” A young woman stands beside a canyon. She clearly enjoys the sunlight as the wind whips her hair, and quite possibly, most likely, she’s high. Then, it is revealed that the woman is seeing herself in a mirror, and that we are also seeing her in this mirror. The secret of this tricky camerawork remains undisclosed. The mirror spins on a horizontal axis, and the woman vanishes. The canyon and sky flicker in the mirror to the reverb of a ritual bell’s ringing undulation.

The sound of the bell bleeds upstairs, into the black-box screening room where Smithson’s film is shown. Here, the bell competes with the sound of insects, tractors and helicopters—tractors to build the Spiral Jetty and helicopters to film it. The bell is interruptive, like a premonition.

There are many odd similarities among Smithson’s work on view in the MCA and Russell’s “Trypps #7.” Each artist makes use of mirrors selectively placed in nature. Russell’s rotating mirror has a small crack in it, and Smithson’s sculpture of stacked mirrors in another MCA gallery, from 1966, is also slightly cracked—these cracks remind me of the small imperfections that Tibetan Buddhist monks intentionally place in their sand mandalas to separate their handiwork from nature’s perfection. Both artists position a single person experiencing the thrall of nature. After running along his jetty, Smithson surveys his masterwork and the lake, and he pulls his hair out of his face. It is a gesture of euphoric conquest. Russell’s woman gets strands of hair stuck in her mouth from the wind, but she is too distracted by her own euphoria to make cosmetic adjustments. There are even more subtle and strange connections, and you should go experience them in the galleries. 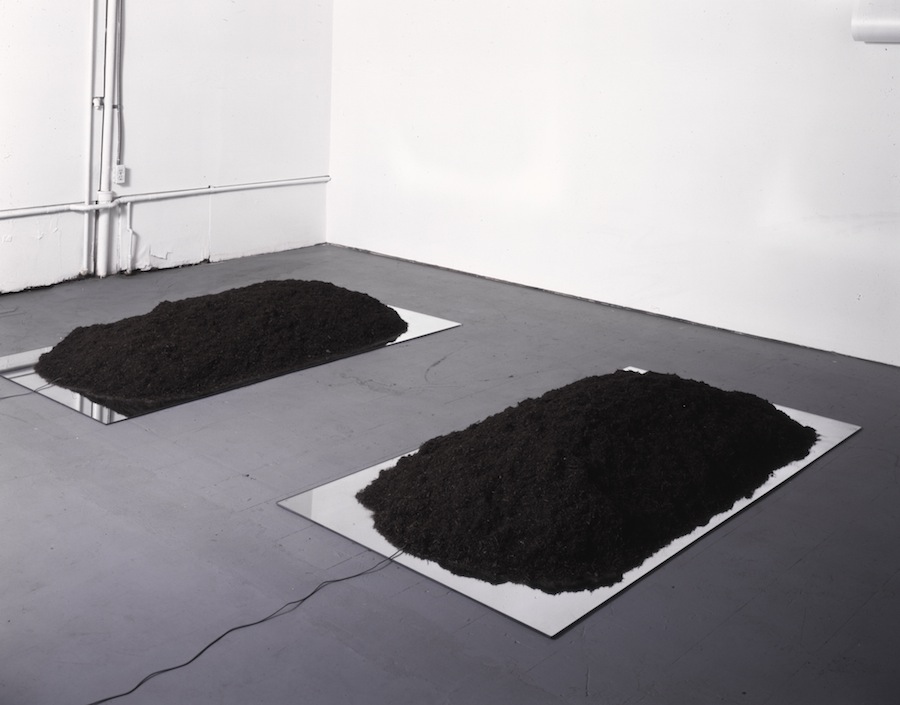 There is a second work in the museum that tries to pick up where Smithson left off. Sam Durant’s “Partially Buried 1960s/70s Dystopia Revealed (Mick Jagger at Altamont) & Utopia Reflected (Wavy Gravy at Woodstock),” from 1998, alludes to a famous Smithson artwork, uses Smithson’s materials (dirt and mirrors), and hints at the same cultural-political moment, the 1960s. Russell coaxes raw experience, whereas Durant tries to grab second-hand meaning. Durant’s heavy-handed work forces a relationship with Smithson, like an annoying groupie, while Russell’s work inherits Smithson’s legacy, incorporates Smithson’s ethos, and transmits, in Russell’s own voice, a unique reflection of a shared cultural perspective: nature as alternative.

(Russell’s film also updates the famous LSD trip scene from 1969’s “Easy Rider.” Both scenes focus on women experiencing drug-induced spiritual trances. Easy Rider’s cameramen turned their lenses to the sun and got some cool glare effects. So, too, does Russell. Both “Easy Rider” and “Trypps #7” succeed at translating an experience of awakening into film). 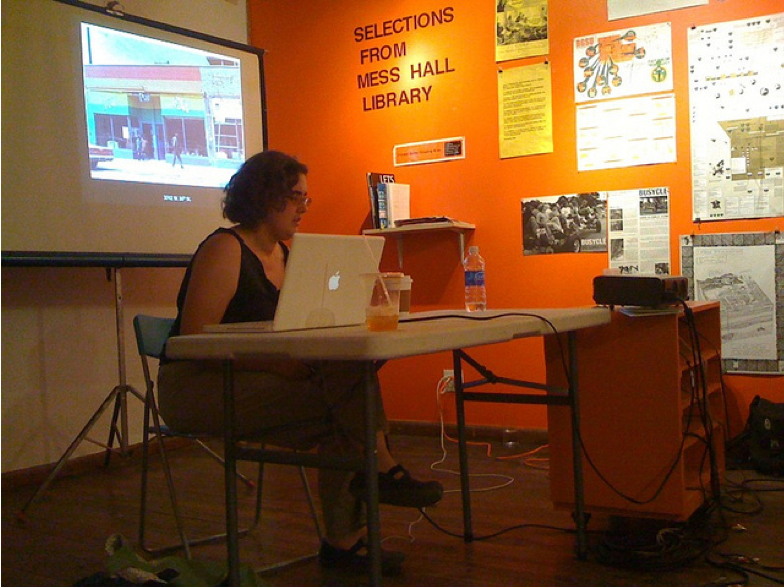 Partially buried secrets from the MCA’s history were further uncovered at Mess Hall this past week, as University of Chicago’s associate professor of art history, Rebecca Zorach, detailed recent research into an MCA-funded project from the 1960s involving gangs and the arts. The MCA was founded in 1967, and in 1968 the museum’s first director paired up with the Conservative Vice Lords, a West Side gang, to create Art and Soul, an alternative arts space in the Lawndale neighborhood that lasted only about four years. The partnering was well documented by the newspapers at the time, and even in a film called “Lord Thing,” but since then little attention has been focused on this unlikely partnership. Why would a fledgling professional art museum make inroads into controversial gang arts? Forty years have passed since anyone has spoken of this collaboration. Will its exhumation inspire the museum to again partner with under-represented, under-exposed, and subaltern artists, such as, perhaps, Ben Russell’s gallery in Pilsen?

Ben Russell shows at the Museum of Contemporary Art, 220 East Chicago, through September 27.