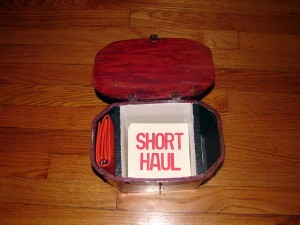 Meg Duguid’s vintage purse houses an art gallery which, she points out, can lead to some seriously awkward encounters. Sometimes when she opens her purse to pay for coffee, the cashiers stare. People have rummaged through her belongings, mistaking them for pieces in the gallery. Some have accidentally pulled out her birth-control pills on a couple of these occasions.

“It’s hard for some people to take this seriously,” Duguid admits.

Since its inception last winter, Duguid’s Clutch Gallery has garnered acclaim for its wide array of exhibits and conceptual use of space. Newcity’s Jason Foumberg even named it one of the top five alternative venues of 2009. The gallery has also inspired much confusion. However, Duguid explains, “[When] you explain the curatorial aspect, [viewers] get it’s more gallery-esque.”

Though she is a performance artist—she recently took part in the MCA’s “Here/Not There” series—with an MFA from Bard College to boot, Duguid spent several years toiling in galleries. She then decided to embark on a year-long curatorial project so she might interact with the public in a more meaningful way. “I love the idea that the people who see the art aren’t artists exclusively,” she says. 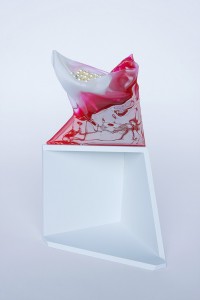 Matt King, in the Clutch

The gallery constitutes twenty-five square inches and currently features the landscapes of Meg Wilbar. Luminaries such as Matt King and Nick Black, whose installation notably featured a pickle rotating to a disco soundtrack, have also shown in previous months. Duguid is currently in talks with an animator for the next exhibition. She has managed to build an impressive roster so easily due to the working relationships she has with many of these artists. As long as the artworks are portable and easily secured to the gallery’s walls, Duguid will consider almost anything. She abandons standard curatorial principles in favor of personal taste, selecting pieces that she deems “good” and “well crafted.”

The Clutch Gallery exemplifies the recent “alternative space” phenomenon in the city, and Duguid wouldn’t have it any other way. She says of this recent development, “It allows for […] artists to have site-specific venues to create an experiment in.” For Duguid, context is of utmost importance. One of her main criteria for selecting art to exhibit in the gallery is how it fits the highly unusual setting.

“That’s the beauty of context,” she offers, “As long as I can contextualize [the works] properly, [the gallery] is as valid as any other space.”

The project wraps up in December, but Duguid excitedly reports that a young woman—a current Bard MFA student and fellow artist based out of Bombay—wishes to replicate it, beginning that same month and ending the following year in March. It’s an unexpected but welcome piece of news for Duguid, who plans to return to her own creative endeavors eventually. She maintains that she’s not a curator and does not aspire to be one. If nothing else, the Clutch Gallery was simply a year well spent. (Emma Ramsay)