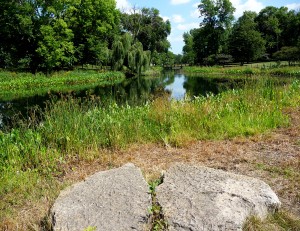 One of Chicago’s neglected treasures, except by the denizens of the surrounding neighborhood, Humboldt Park is vast and filled with wildlife, greenery and waterways, all of which have beckoned photographer Dina Petrakis, who spent the year of 2009 there to create a “naturalist photo essay” inspired by conservationist Aldo Leopold. Shooting in color, Petrakis goes close up to capture intimate details and draws back to frame panoramas, arranging her shots in groups and grids, and deploying large and small formats in order to communicate the full experience of the park when it opens up to the solitary walker. Petrakis’ banner photo-work is her 4×3 grid depicting the same view of the scenic and sinuous Prairie River in each month of the seasonal cycle, from the icy barren winter, through spring’s blush, summer’s lushness, and bittersweet autumn, to winter again, now sporting its snowy white mantle. If Petrakis and a stroll in Humboldt Park do not convince you to become a habitué, you are insensible to the wonders of the world next door. (Michael Weinstein)

Through October 29 at the Humboldt Park Boat House, 1359 North Sacramento

[…] Seen in one photo per month, this montage shows the Prairie River in all the nuances of the seasons.  Review by New City: https://art.newcity.com/2010/09/06/review-dina-petrakishumboldt-park-boathouse/ […]