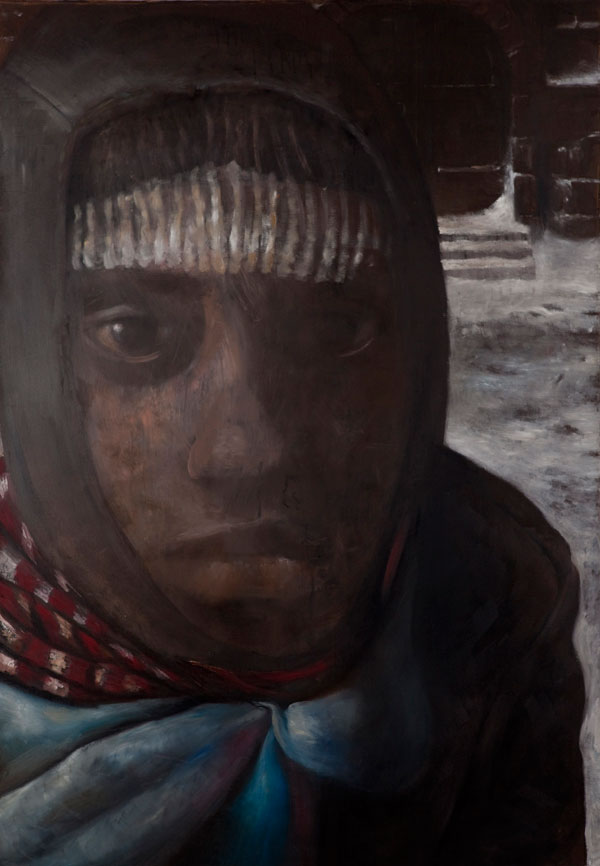 Heather Marshall and Chuck Walker might well be called the yin and yang of figure painting in Chicago. What could be more delicate than Heather’s small, bright, flat photo-realism—and what could be more bold than Chuck’s wall-sized, dark, deep, Baroque-dramatic paintings? So it’s quite a thrill to see them side-by-side at Linda Warren Gallery this month, but it’s also something of a disappointment, since the stories they each tell don’t quite deserve their technical mastery, without which, Marshall’s paintings are merely overworn clichés of modern photography’s critique of American life, while Walker’s paintings would not rise above sentimental pulp fiction. Their technical mastery, though, does make this a memorable exhibition. Marshall’s finesse is breathtaking, while Walker’s bravura figure painting can only have resulted from the tens of thousands of figure sketches that he’s done over the decades, several of which have been posted on a small wall in back of the gallery. Unfortunately, unless they’re done by famous artists, such life drawings have minimal market value, but Walker packs as much teeming life into them as into his paintings that are a hundred times larger. Something has to be said for his lonely, single-minded pursuit of this kind of image making that was abandoned by the American art world at least fifty years ago. This is his first solo exhibition in a commercial gallery in fifteen years, and we can believe that he will continue to soldier on with his hard-scrabble visions of urban life, regardless of what sells in this show or not. (Chris Miller)