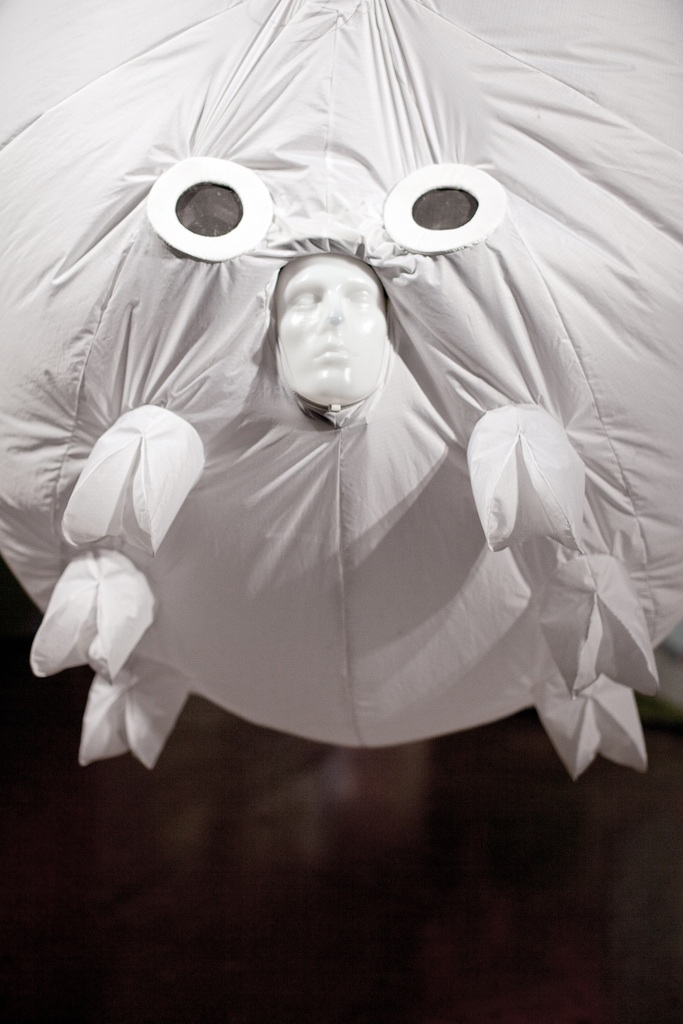 Imagine you’re a busy exec with a huge staff of Nike-stitching slave labor in Sri Lanka to control. How to comfortably manage them from the beautiful Pebble Beach golf course? The Yes Men have answers. Step into their gold skin-tight Management Leisure Suit, equipped with an inflatable three-foot long phallus, at the end of which is embedded a computer screen so that you can monitor, communicate with and direct your off-site sweatshop, while still swinging your nine iron freely. You’re busy. You owe it to yourself.

Or consider this: if those silly militant “environmentalists” prove to be correct about the increasingly unstable climate, how might you guarantee your own survival in the wake of global catastrophe? Don the Halliburton SurvivaBall, a fully equipped self-sustaining six-armed ball that functions as a life-support system. It can even draw “resources” from other living organisms to keep itself powered, and will ensure your safety come hell or high water, which are certainly viable options. 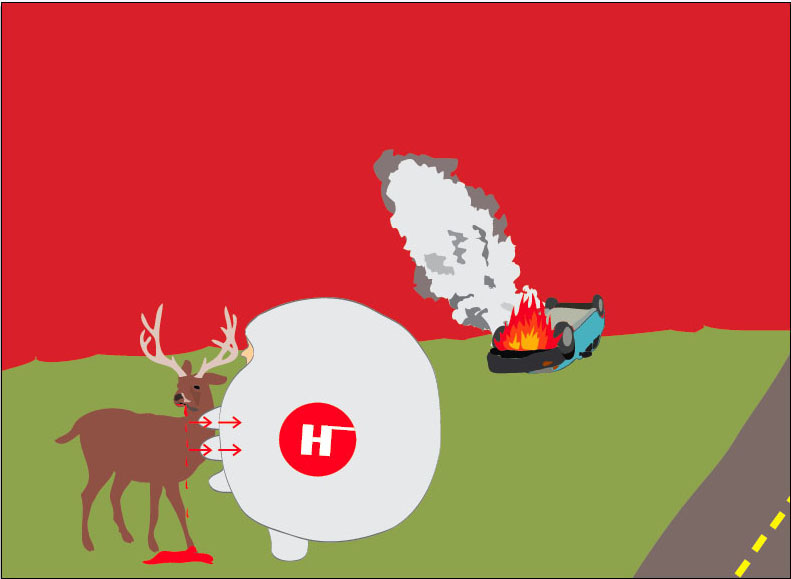 These are only two of the odd pieces on display at the first solo show of The Yes Men (led by Andy Bichlbaum and Mike Bonanno), a survey of their bizarre and brilliant efforts at corporate “identity correction,” often beautifully constructed political pranks that highlight the immoral actions of the one-percent who call the shots on this planet. The Yes Men infiltrate executive culture in the guise of representatives of Exxon, Dow, the National Petroleum Council, McDonald’s, and anyone else they can take aim at who contribute to ruining the world, and either parody a company’s irresponsible behavior or take such behavior a logical step further, devolving sometimes into absurdity (the recycled Micky D’s “reBurger” or candles made of “Vivoleum,” a fuel substitute derived from the flesh of a deceased Exxon janitor played by musician/artist Reggie Watts).

It’s strange to see the accoutrement of The Yes Men’s activism in a gallery, especially since the stages they’re used to are far larger. When they impersonated a Dow employee on the BBC to take responsibility for the Bhopal disaster, they reached millions of viewers and cost Dow billions of dollars in stock. It’s also incredibly engaging to see their handiwork close up. It helps you understand that The Yes Men are just a resourceful group of individuals interested in shining a light on some of the large-scale capitalistic fuck-ups that go unnoticed and often unpunished. Most of all, the exhibition, titled “Keep It Slick,” is hands-on and human-sized enough to encourage all of us to be Yes Men, which may be the biggest lesson this show has to offer: we can be agents of positive social change, and “Keep It Slick” is a beginners manual. (Damien James)

FYI: There is a screening of The Yes Men Fix the World on September 22, 6:30pm @ Film Row Center, Columbia College. Free and open to the public.