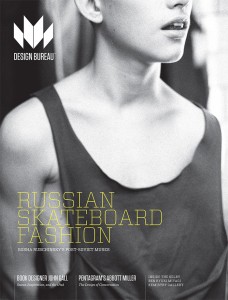 At a time when conventional wisdom says  print media is singing its swan song, Chicago-based Design Bureau launched this summer, as a new release from Alarm Press, with a hefty, glossy magazine.

Chris Force, editor-in-chief and publisher of Design Bureau and Alarm Magazine, which recently converted from a print mag into a series of books, decided that the new magazine, which is available now, printed six times per year, was due for creating, conventional wisdom be damned.

“I really wanted to start making magazines again. I really have a lot of faith and believe in [the medium]. And in particular, for the design community, there was a hole in the market for a magazine like Design Bureau,” Force says.

Design Bureau will be covering design and design conversation from around the world, while keeping with unique and diverse editorial topics, from Lamborghini designers to bicycle culture and design.

The magazine isn’t just interested in writing about designers, though. They are looking to help strengthen the design community and provide content at an inspirational level, across disciplines, locally and abroad.

“It’s definitely a broad focus, but we’re making Chicago our home base. It has a great design community, based on a working ethic and really falls into line [with the magazine],” Force says.

The first issue dropped in August, so the next is set to print for October and subscriptions are available on their website, wearedesignbureau.com. (Lindsey Kratochwill)