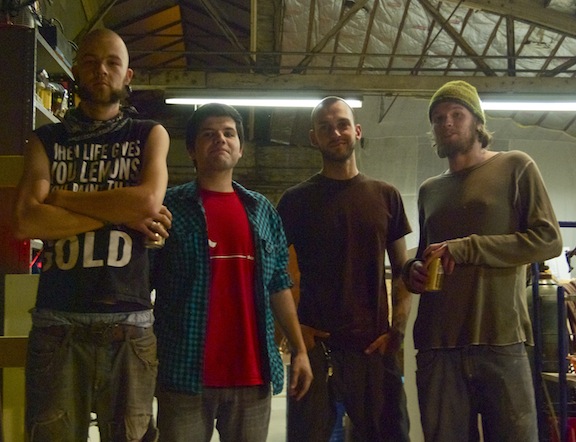 Earlier this summer, five twenty-something artists, frustrated with what they considered a lack of fresh work within the current art scene and looking to develop a new artistic community, packed up their apartments, picked up some nail guns, and moved themselves into a 4,150-square-foot warehouse in Logan Square and began to set up shop. With fewer than five months under its belt, Red Gate is out not only to make a name for itself—but for a whole new group of artists investing themselves in a new aesthetically minded, cooperative society.

“Three and a half years ago, I was feeling really kind of disillusioned with the way school was going,” says sculptor and painter Jason Hawk. “Everyone was very involved in their own little world. So what I started thinking was, ‘How I could build some sort of an active community in this really isolationist place?’” Hawk wasn’t alone. As he spent more and more of his nights (and wee morning hours) in the studios at the School of the Art Institute, he found that a few of these late-night workers shared in his feelings of disaffection.

“We definitely all encountered each other in that same environment, in taking advantage of the resources outside of class time,” says sculptor Lloyd Mandelbaum. “There wasn’t really a community or resource where we felt we could facilitate our creative practices.”

Along with graphic designer Sal Dominguez, process artist Eric Gushee and fiber artist/soft sculptor Amy Hilber, they began to explore ways to make their objective a tangible reality. Upon leasing the Prohibition-era warehouse that now serves as their collective live/work space, the group embarked upon the daunting task of building their new studios, as well as their bedrooms, kitchen, bathroom and an already operational foundry specializing in fine-art casting. They laugh, reminiscing about the construction experience as though it were not merely a few months ago.

“We’re fiber artists, graphic designers, print makers,” says Mandlebaum, gesturing to the array of in-progress artworks and innumerable materials at Red Gate’s disposal. “We don’t build houses. I don’t build houses. And I mean, like, I’ve nailed some two-by-fours together once, but… there was an accelerated learning curve.” 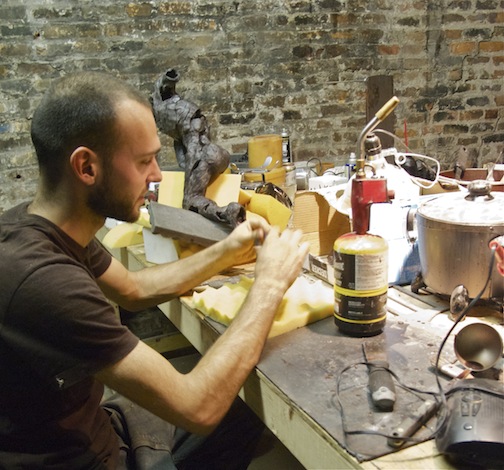 As though the renovations to the warehouse itself were not enough to challenge the group, their 5,100-square-foot yard was turned into the new home of Chicago Crucible, Mandelbaum’s year-old artist foundry dedicated to bronze, aluminum and iron casting. The foundry has already proved to be a remarkable source of income for the group, whose cooperative nature and seemingly boundless energy helped them to complete a commission of two hundred metal castings in only two weeks. Additional commissions have included a sign for a children’s hospital, and candlestick castings for the main altar at Trinity United, a church on Chicago’s South Side.

“It can be hard to sit down and say, ‘Today I will apply for this show. Tomorrow I will apply for that show,’” says Hawk, who recently displayed work alongside Jason Brammer as part of the Chicago Loop Alliance’s Pop-Up Art initiative. “But as a group, one of us will find an opportunity and essentially push one another into trying to make it with our work.” The creative push seems to be working: on September 11, Gushee won the $1,000 top prize at the Elgin Next Wave Art Salon—the same weekend in which Hawk was exhibiting at Peoria’s Contemporary Art Center and that the group as a whole presented at the Flat Iron’s “Beyond the Coyote.”

This remarkable amount of effort and collaboration is all part of Red Gate’s plan to create a community of artists focused on what best serves the artist as individuals, as well as the group as a whole. Dominguez, defending and describing their method, says that as a group, Red Gate’s can “do things that as an individual we might not be able to do, or might not think to do. It offers us opportunities to explore the type of art that we want to do, that we love to do, and not just making art that we think is going to sell.”

Red Gate has already begun to carve out its place within its new community, establishing themselves in an area where their neighbors share in their artist-first philosophy. (In an April interview with the Chicago Tribune, HungryMan gallerist and Red Gate neighbor Robin Juan stated, “Our gallery has never been concerned with selling work, as much as promoting the artists that we show.”) As the Milwaukee Avenue Corridor continues to carry out its revitalization plan, odds are that Red Gate will soon find themselves sharing fences with even more young artists looking to escape the usual gallery scenes and immerse themselves in this “new” generation of cooperative creativity.