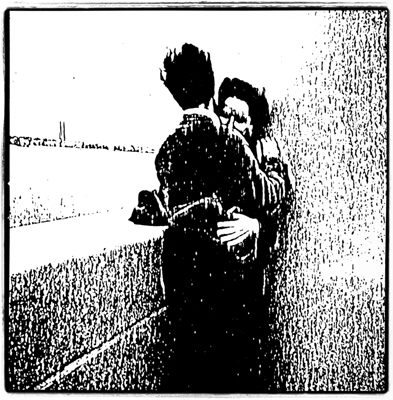 Shooting scenario street portraits in a nameless city in black-and-white, David Akiba proceeds to put his prints through a photocopier and then photographs his reproductions, coming up with grainy images that emphasize alienation even when he—only once—captures an embrace. Most characteristic of Akiba’s approach is a diptych recording the same scene of a man walking through a corridor with a shadowy woman in front of him and a man standing behind him in a doorway; in the left panel, the woman resolves into a black silhouette, the walking man is reduced to a mottled decomposing cartoon figure, and the man in the doorway retains a recognizable presence; in the right panel, the woman has become a stain on the wall, the walker is silhouetted in black, and the standing man is a mottled cartoon figure about to fuse with the wall. For Akiba, the perspectives that we take on ourselves and the people around us vary, yet whether we are in high relief or about to disappear, we are always alone. (Michael Weinstein)