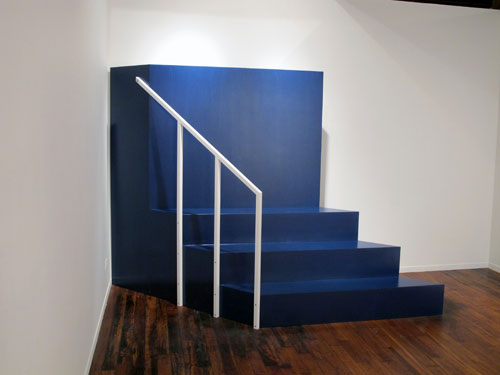 Edra Soto, "In Memory Of Our Sentiment (mausoleum)"

The Christian church has always been associated with the body—primarily, of course, the crucified body of Jesus. The Eucharist is the ritual of symbolically ingesting the divine flesh and blood, and the Apostle Paul speaks in his letters of the community of believers as Christ’s body. The founding of the Church in the book of Acts features more bodies, in the graphic deaths of Judas the traitor and the early martyrs Stephen and James.

In Edra Soto’s new exhibition and installation, “Homily,” she turns the gallery into a sanctuary, a sepulcher and, inevitably, a living body, as colorful exuberance struggles against a weary patina of gentle decay. Objects of contemplation are offered by a group of paintings, in which domesticity is abstracted into gemlike miniatures of prismatic gradients, embossed foil, bubbles and shining beacons, spinning dreamlike icons out of familiar images. Twining human bodies made of spiderwebs, a face made of rope, a rumpled-blanket landscape, a purple tree encircled by cavorting clones of Soto’s Benji-esque dog, and a grinning blue-faced shaman wearing said dog as a mantle, all bring to mind an eerie painted illustration of paradise in a Seventh-Day Adventist pamphlet, mixed with the cosmic pagan creepiness of an animal sacrifice in a forest preserve.

In the rest of the main gallery, a shrouded tower of plastic champagne glasses doused in blue paint represent the Eucharist, a gnarled mass of multicolored plaster limbs recall the congregation of locked twitching fingers in “here is the church, here is the steeple…,” and the altar is an oversized blue staircase that leads to a long vitrine filled with skulls, cacti, and earth. 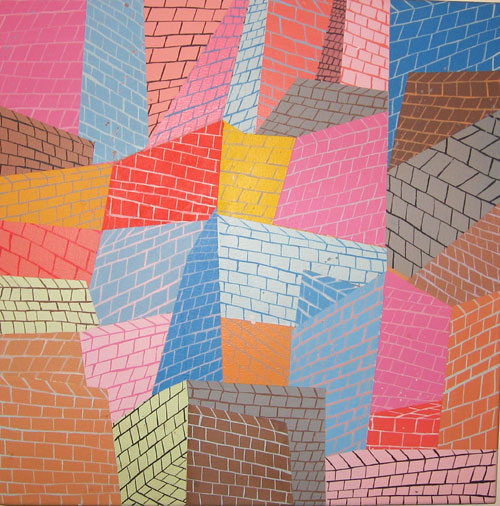 Paintings in the adjoining gallery, in a show curated by Soto, include a dazzling goopy semi-abstraction on copper-colored fabric by Corinne Halbert, a quiet landscape-esque watercolor by Carmen Price, and an eye-popping geometric collision of vivid brick-wall patterns by Thad Kellstadt, which cries out to be made into a pair of Jams. As visually scrumptious as all three pieces are, and despite their resonance with Soto’s organic touch and radiant palette, in comparison with her work they evoke the C.S. Lewis quote: “Holy wisdom is not clear and thin like water, but thick and dark like blood.” (Bert Stabler)

Through October 30 at Ebersmoore, 213 North Morgan