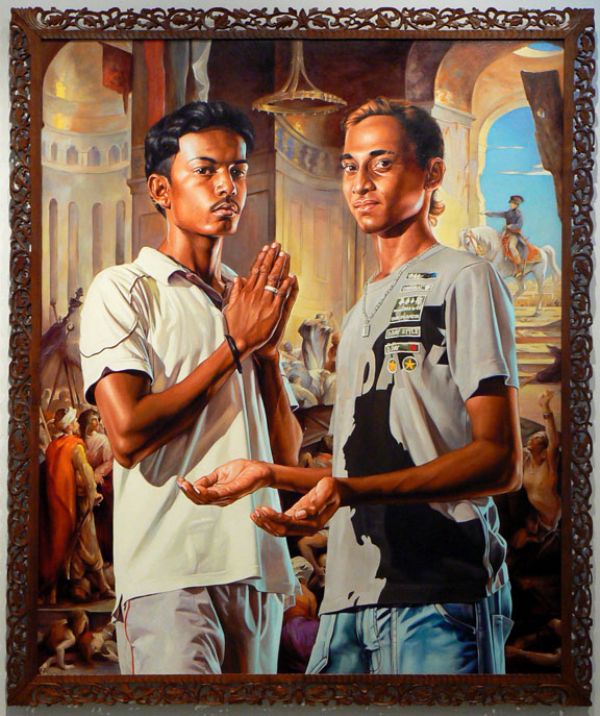 Kehinde Wiley has had twenty-six solo shows in museums and galleries since 2003, and his work is in the permanent collections of sixteen American art museums, including those in Milwaukee, Brooklyn, Denver, Minneapolis and Detroit. Obviously there has been a strong upscale market, both critical and commercial, in the opening years of the twenty-first century for dandified depictions of healthy young men of color, beginning with African-American, and now expanding into sensitive young dudes from Asia. And yet, art critics still continue to discuss whether Wiley can actually paint. Like Louis Comfort Tiffany, he seems to be less an artist and more a manufacturer of high-end luxury goods, with workshops in New York and China, and twenty assistants employed to paint around his digitally manipulated source material.

As Roberta Smith in the New York Times wrote in 2008, his earlier paintings “usually felt dead and mechanical, despite having been painstakingly handmade; their compositions were often fussy and unstable,” while in his more recent work “he is beginning to paint skin in ways you can’t stop looking at….the compositions are consistently calmer, and the spatial play between the figures and their backgrounds is more tightly controlled.” David Greenberg, in Art in America, judged that “Wiley is most successful when depicting in oil the vibrant contemporary street wear of his models with a painstaking skill that borders on the fetishistic.” And perhaps, compared with what passes as figure painting in summer art fairs, these judgments are reasonable. 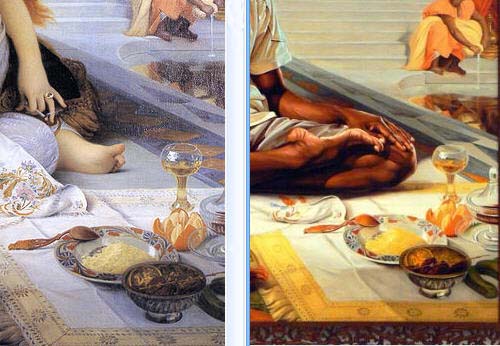 By borrowing elements from classical European painting, Wiley has invited comparison to their qualities, and even a relatively unknown academic painter like Jean-Jules-Antoine Lecomte du Nouy (1842-1923) shows him up rather badly. Just compare a detail from the original “The White Slave” to Wiley’s updated version. Can Wiley paint fabric or flesh? Wiley (or his assistants) are meticulously copying manipulated digital images. The entire art of imagining form and space is absent. So many tactile qualities, and all sense of depth and atmosphere are gone, especially where high contrast shadows in the figure, or high-key colors in still-life, have destroyed them. Presumably, Wiley could hire assistants who have been classically trained in neo-academic ateliers, but then his paintings would lose those flashy-trashy qualities that provoke attention like a Bollywood movie poster. The classical art from European (or any other) civilization offers a different kind of aesthetic experience, so the highbrow appeal here continues to be limited to those academic issues of “culture, race, gender, ethnicity, nations” raised by Thelma Golden in her 1995 Whitney exhibition “The Black Male.” Fifteen years later, though, we can still ask if paintings, especially those made to service an upscale market, are really the best way to seriously examine those issues? (Chris Miller)