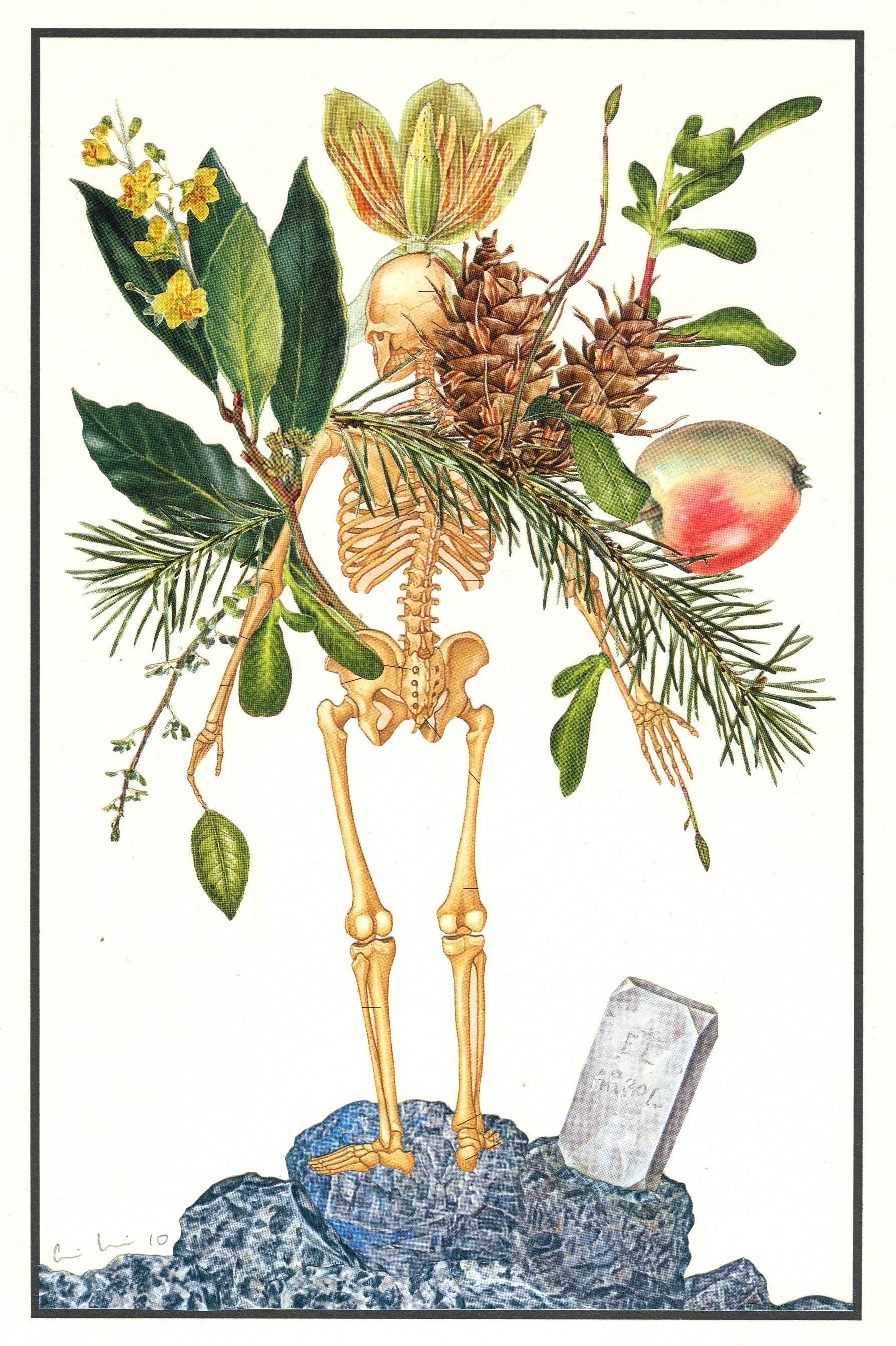 Death, in the board game lotería, is safe as Rose. They are simply nouns, presented in picture, as playing-card decoration. Lotería is a game of chance but you don’t really get Love or Death from it, only win or lose. In the card set of tarot, though, Death or The Fool mean what they mean, whatever they mean.

The common tarot deck (twenty-one cards) and the lotería deck (fifty-four cards) share six characters: The Devil, The Moon, The Sun, The World, The Star and Death. Both decks were popularized about 200 years ago, in Mexico and Europe. The current enthusiasm for and allure of these card decks is their singular, focused imagery. Spider or sliced Watermelon, they float against the blue sky. The Devil, what’s he got to do with it? Homage to these decks reinforces the supernatural perception that images have meaning in our lives, as talismans. Metamorphosis is a common theme in many of the remakes. People morph into animals, and animals morph into dead animals. 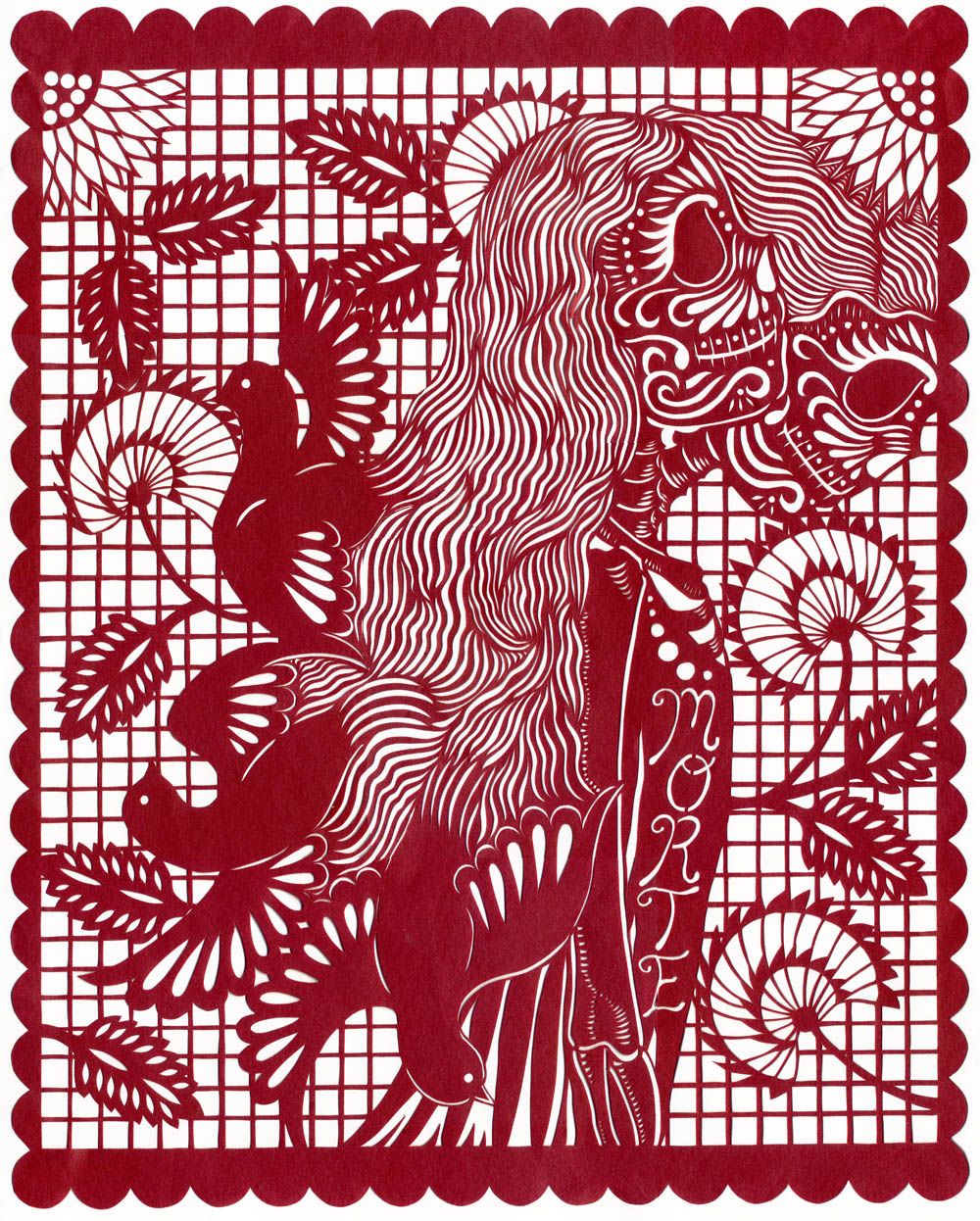 In “Wild Card,” the tarot show, Rick Leech’s screenprint of The Moon could replace the original. A prim lady with a lapdog shape-shifts into a blood-thirsty nude of the night. Leech’s card, in green, red and gold, and with a decorative border, perfectly captures the mood of the parlor where such a card might be drawn.

Rob Doran’s take on The Hierophant (or pope) dissolves the embodiment of divinity into a mystical diagram worthy of a witch’s recipe book. The unidentifiable shapes and smears of rare mineral dust push Doran’s image beyond a literal response to the exhibition’s task, into a realm of strange—good strange.

Most artists of “La Lotería” also treat their subject quite literally, but the enjoyment of re-creating such iconic imagery is apparent. Some artists aim for political statements but fall a little short, while others who simply play with the popular images, such as Chris Kerr’s “La Botella” (a bottle of cerveza) and Miguel Cortez’s “La Escalera” (a ladder to nowhere) pack a poke of humor and intrigue in the same folky way as the original deck.

There are many variations on the theme of lotería in this show, including a finely rendered letterpress deck inspired by the city of Los Angeles, from Aardvark Letterpress, and a shed in the desert where Mexican immigrants can share stories and traditions. Documentation of this shed and an associated computer online casino game are the only objects in either show that re-imagine the cards as user-friendly. Artist Damara Kaminecki is featured in both exhibitions, where she shows meticulously cut-paper objects.

Neither exhibition deals with the cards as a hand-held object. Tarot and lotería are meant to be handled, but here the decks become rarefied objects made for observation. For most visual artists this is an acceptable way to approach these objects. Lotería players or fortune tellers might produce a different exhibition design. (Jason Foumberg)