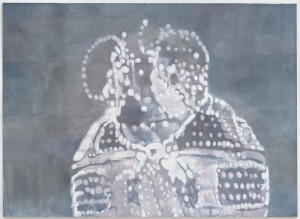 The French term mâitre à penser refers to a person who does more than just produce philosophy or art, it designates a person with a public profile who teaches people how to think. Luc Tuymans, a Belgian who might not like the French reference, poses very specific questions about what it means to be Belgian. He is a good example of what Americans might call a public intellectual, even though our first impulse would be to classify him as a visual artist. Seventy-five of Tuymans’ wan, sketchy and unprepossessing, yet extremely influential paintings, chosen by MCA head Madeleine Grynsztejn when she was at the San Francisco Museum of Modern Art and Helen Molesworth, now at the Boston ICA, will be on display in Chicago until January 9. The subjects of Tuymans’ work are often images of images of images, glimpses from snap shots, newspapers, the web, apparent throwaways until some detail leads us to their historical and political significance.

A painting, “The Architect” (1997), from a still appropriated from a home movie of Albert Speer on the ski slopes, provides a good example of Tuymans’ method. The figure’s “effaced face,” as Tuymans puts it, is the troubling painterly detail that gives a sense of urgency to a deceptively unremarkable image. Part of his investigations into the history of the Third Reich, the banal image might evoke a response regarding the lack of justice in a world which rewards the architect of the concentration camps the leisure and opportunity to downhill ski. Tuymans’ sharp associative leaps and telling connections inform us that Speer once commented that the prisoners in the camps had too much space. The empty snow field surrounding the subject takes on new meaning.

Once the actual paintings take their place in the process as part of Tuymans’ inquiry into the inglorious legacies of modern history, Belgian colonialism (with CIA collusion) and contemporary politics (his painting of a news photo of Condoleezza Rice appears here), the viewer realizes that the faded quality, the everyday subjects, simultaneously represent memory and amnesia, the power and limitations, of not only painting, but visual images in the context of history. (Janina Ciezadlo)

Through January 9 at the Museum of Contemporary Art, 220 East Chicago.

An alternative response can be found here: