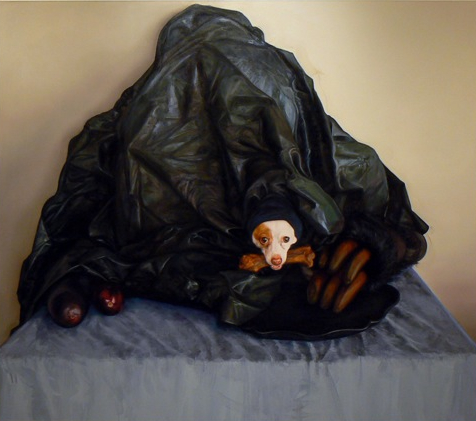 There’s a lot of excess baggage that comes with being a young female painter who makes paintings of her dogs. Just ask Raychael Stine. A 2010 graduate of the University of Illinois at Chicago’s MFA program, Stine is sometimes asked if she does commissions—“I have a Chihuahua too! Can you paint him?” When she was an undergrad at UT Dallas, Stine was referred to as “The girl who paints her dogs.” Even more vexing is the persistent assumption that Stine’s representational approach to painting is something she has yet to “outgrow,” as if it were not, in fact, a tactic she has consciously chosen for its ability to encapsulate emotionally inchoate and often covertly personal subjects within forms that have themselves been cast off as degraded, subservient, less-than. 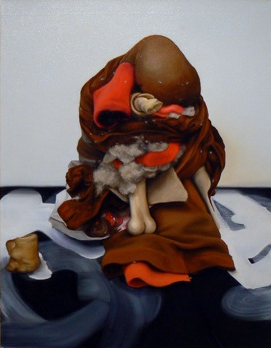 Stine’s own dogs Pickle (a Dachsund), Hal (a Chihuahua) and Charlie (a mutt) are her main subjects, their scars and stains and idiosyncrasies of flesh and personality so skillfully and, yes, soulfully rendered that it can take a concerted effort on the viewer’s part to focus attention on the rest of the composition. Once we do, we realize that these are some pretty fucked-up dog paintings.

Each work contains various points of tension and reversal—Stine calls them “suckers”— that snap the composition into territory that’s spatially and psychologically off-kilter. In “Food for the Moon,” a table covered with a pale blue cloth provides the setting for an odd constellation of objects—bananas, eggplants and the face of a small Chihuahua gripping a large, meaty bone in his mouth. Looming directly behind is something that looks like a giant black garbage bag. The tightly fitting material around the dog’s face makes it appear as if he’s being sucked in or squeezed out of an orifice. Is it a rectum? A wormhole? The painting’s title provides another way in (or out) by referencing Georges Gurdjieff’s notion that humans at their most primal are “food for the moon,” their actions mechanistically controlled by forces outside of themselves. 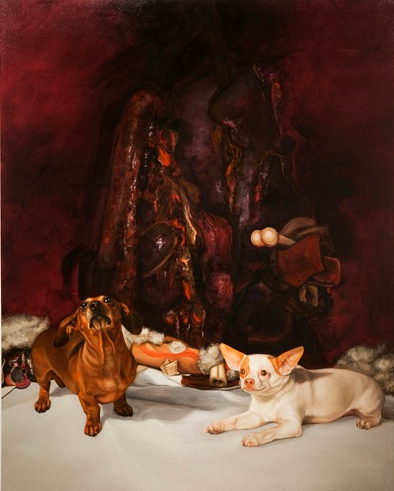 Stine’s paintings hint at unspoken trauma that’s buried under mounds of bones, blankets and stray bits of stuffing in works like “Pile” and “Portrait (Still Life).” It also manifests in the glints of underpaint that illuminate “Charlie (Martyr)” from within, and in the loose, semi-translucent brushwork of “Early Darkness,” where the materiality of the painting itself is viscerally exposed. Stine says that every one of her paintings contains “a whole other painting inside of it” characterized by this type of fast, free brushwork, buried alive (as it were) under multiple layers of paint. Stine’s work can also be pretty funny: just look at her portrait of Hal, his head heroically cocked, his gaze somewhere off in the distance. For one brief moment in this dog’s life, he’s free: neither aware of nor requiring a human’s approving glance. One imagines that Stine herself aspires to something very similar. (Claudine Isé)