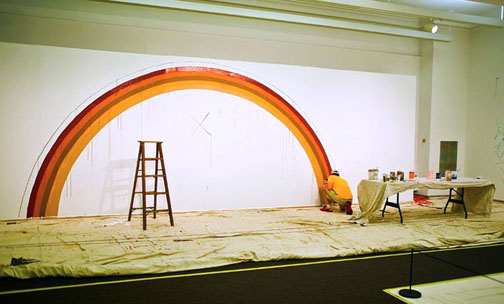 Europe’s Large Hadron Collider recently knocked Fermilab out of the number-one slot for having the largest particle accelerator in the world. Its job? To smash different types of particles into one another at about the speed of light in hopes of finding out what type of stuff the universe is made of. The notion that the tiniest imagined particle could hold the key to the entirety of our vast universe is related to the telescoping attention artist Jeff Zimmermann pays to everything from the reflective foil of a Fritos’ bag in the gutter to the individual faces that orbit the popping, well-designed tableaus of his large-scale murals.

Also, this time the “urban tumbleweed,” as he calls them, such as the chip-bag detritus, will actually be displayed alongside his mural, creating an environment out of piles of crumpled up scratch-and-win lottery tickets, votive candles and miniature flags for his hyper-realistic, graphically garnished mural.

Like the two monumental, floating portrait busts painted on paper on view at DePaul University Art Museum’s “Nomadic Studio” exhibition, elements of Zimmermann’s composition will appear with the patchy layers of test colors slathered around them as a pelt of Technicolor camouflage.

Watch Zimmermann’s process unfold in the gallery space Tuesdays and Wednesdays from 9-5 and Fridays from 12-5 until November 5, and from there after, check the Chicago Artists Month website for a time-lapse video of his progress in warp speed or join him for the unveiling of the finished product the evening of November 5 from 5:30-7:30pm. (Thea Liberty Nichols)