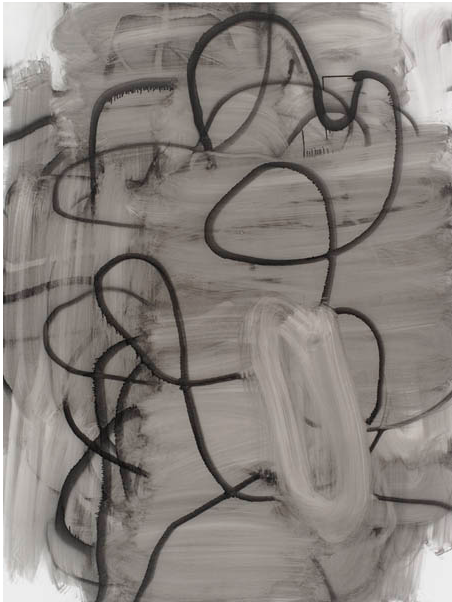 An art show can be like a radio station, bringing together work that seems surprising for a second, and then you realize, sure, people who like Billy Squier might also like Blind Melon. This can also be true for the oeuvre of a single artist, as in the case of star painter Christopher Wool. He made his name in the 1980s as a macho answer to text artists like Barbara Kruger and Jenny Holzer, doing large black-on-white paintings that applied a catchy formalist brutality to conceptual art by making gridded-out all-caps stencil poetry from words like “FOOL” and “RIOT,” and phrases such as “FUCK EM IF THEY CANT TAKE A JOKE” and “HOLE IN YOUR FUCKIN HEAD” (for me these always evoked the ethos and logo of the LA punk band Fear, a word he also put on canvas). But his monochromatic vision extended also into grainy gritty photographs, messy layered screenprints, and scribbly gestural paintings, using at turns rolled, dripped, or sprayed paint, sometimes smeared with turpenoid or “erased” with white paint. Wool demonstrated that he was capable of mining the legacy of Twombly, Rauschenberg and Warhol, as well as Weiner, Nauman and Johns, his offhand yet high-priced gestures leveling all postwar art with the cast-off indifference of a photocopier. Wool’s new exhibition, “Sound On Sound,” at Corbett vs. Dempsey is in conjunction with the release by gallery co-owner John Corbett’s record label of a forty-plus-year-old recording by jazz musician Joe McPhee, and in the show’s catalog we see a ventilator-masked Wool at work on his monumental canvases, displaying his own ability to present a performative persona á la Jackson Pollock’s 1949 Life magazine profile. So while he may have moved from punk into jazz, Wool’s recent collaborations with young Turk painter Josh Smith prove he has lost no cred. And while the density of his surfaces has increased with the blueness of his chip, his swagger has lost no insouciance. (Bert Stabler)

Through November 27 at Corbett vs. Dempsey, 1120 North Ashland.