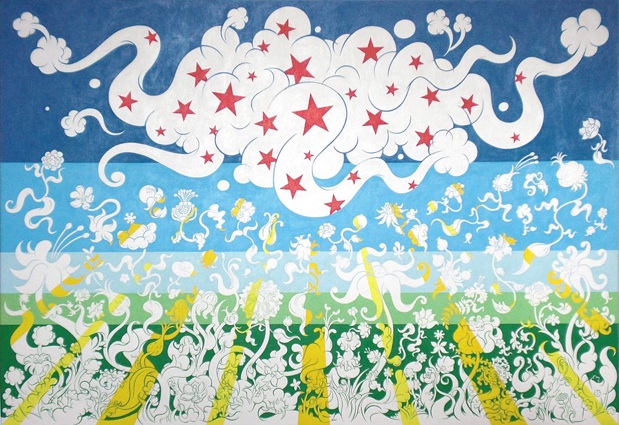 Last week’s short-lived controversy surrounding Chicago’s first Art Loop Open, spawned by the ouster of competitor Bernard Williams, stirred a small media frenzy. Prior to Williams’ disqualification and later reinstatement by the competition’s organizers, a few media outlets promoted the event and explained the ground rules. But controversy is media gold, and by last Friday everyone was buzzing about Williams’ disqualification.

In the rush of reporting, no journalists or commentators officially put into print why the controversy mattered. Few publicly shamed the organizers for their mistake, or commended them for sticking to their rules; nobody opined whether or not cell-phone text-message voting really empowered the public to command contemporary art; nobody said that this competition was good for the community. Even after the prizes were handed out, no media outlets endorsed the winners or empathized with the losers. Does this polite journalism mean there’s a lack of critical capacity in our local arts coverage? Or does the silence imply a shared agreement: the competition wasn’t welcome from the start?

In mid-August, Deanna Isaacs of the Chicago Reader mapped the ins-and-outs of the coming circus. She explained how the new Art Loop Open competition was modeled on the successful ArtPrize in Grand Rapids, Michigan. Readers may have been able to gather the critical subtext of Isaacs’ otherwise straightforward article: “local landlords get to play curator,” she wrote, and the ArtPrize was a “populist festival that turned art criticism into sport for the masses.” Would these subversions of powerful roles (curators, critics) be game-changers for underprivileged contemporary artists? No comment.

Time Out Chicago’s Lauren Weinberg asked a pointed question in her art column last week: “In the annals of Chicago’s public art, will we remember [the Art Loop Open] as a humiliating sequel to Cows on Parade or as a classy crowd-pleaser like Anish Kapoor’s ‘Bean’?” She then tossed around the pros and cons of a public art competition, but did not answer the question she asked.

The Chicago Tribune’s art feature writer Lauren Viera reported on the Williams controversy and interviewed upset contestants. I personally contacted Viera and questioned why she had not editorialized on the controversy. As a representative of the city’s most widely circulated newspaper, she missed an opportunity to rally a public opinion. Viera responded that if readers desired the Tribune to think critically about the controversy, they could submit a request in writing.

The entire press coverage of the Art Loop Open competition—and not just the small controversy over Williams—was tepid and passive when it should have been passionate and opinionated. In his blog on the Chicago Now consortium, Abraham Ritchie did fervently call for the ALO to rescind their decision on Williams, even going so far to speculate on a sabotage for the $25,000 prize. “Competition can bring out the worst in people,” he wrote. Later, Duncan MacKenzie on the Bad at Sports blog justified the use of sabotage in art competitions: “With real money at stake you have to expect that every artist is going to do what they can to get in to the finals.”

Indeed, the controversy made everyone look unstable. The Art Loop Open pretended that its competition wasn’t a popularity contest when it disqualified Bernard Williams, although as it functioned, that’s all and only what it was. Williams wrote that the disqualification “feels like a lynching” on the ALO’s Facebook page. Nobody flinched at this exaggerated claim of a violent and hateful crime.

I’ll be the first to say that we don’t need an art competition like this in Chicago. Certainly I do not want to deny artists the possibility of making money, whether hard earned or a quick buck. There are only two ways that an artwork can earn its maker some cash—sales and awards—and both are few and far between. But the type of competition waged here was not productive in the long term. For artists, there is already too much false hope in the art world.

Although the Loop Alliance is doing good work to bring art into new venues, such as the pop-up galleries, this competition did not draw positive attention to the visual arts, nor did it engage the public as it hoped to do—it’s likely that tourists who bed at upscale hotels like the Palmer House and The Wit are already used to seeing art in such places. I’ll also be the first to say that John Dempsey’s winning painting is not a great painting or a great work of art—he’s made better paintings than this piece of fluff. I don’t agree that this competition turned art criticism into a public sport, as Deanna Isaacs commented, because the public here wasn’t performing criticism as I know and love it. They were merely shopping for a winner.

The ALO competition most strikingly failed in the context of other concurrent art competitions in Chicago. This month the newly established Propeller Fund announced the recipients of artist grants and money prizes. Both the Art Loop Open and the Propeller Fund pushed a mandate that the public must be engaged with contemporary art. The ALO tried to accomplish this by getting the public involved as second-tier judges (first, an ALO jury whittled 700 applicants into 200 contestants), whereas the Propeller Fund funneled cash through a jury to artists who promise to use the money to engage the public. The difference is small but significant. The ALO tried to empower the public, but Propeller empowers artists to engage the public. Even though I don’t agree with all of the Propeller Fund’s grants (the rebuilding of a lost public sculpture, a N55 land cairn, with sixteen extant identical sculptures, reeks of an obscure academic exercise, although most of the other Propeller winners are totally deserving), I do agree with their methodology because this money has wings. New organizations and collaborations will be built. That is a great model for community support.