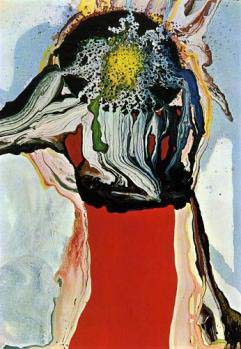 When progressive young postwar Japanese artists followed their American colleagues into the brave new world of Abstract Expressionist painting, they were only expanding upon a tradition that had been putting expressive shapes, lines, colors and textures on the surfaces of pots for over a thousand years. The Gutai Group, founded in 1954, encouraged experimentation with materials and methods. As their manifesto declares, one member worked a large surface “in a single moment by firing a small, hand-made cannon filled with paint by means of an acetylene gas explosion.” The manifesto turns much more traditional when it declares, “We tried to combine human creative ability with the characteristics of the material in order to concretize the abstract space.” Despite their avant-garde mission of “creating a world that has never been,” the results, at least demonstrated by the two Gutai members in this exhibition, display the precise balance demanded by traditional Japanese aesthetics instead of exposing the self-destructive absurdity of the modern world.

“In contrast to Dadaism,” the manifesto continues, “our work is the result of investigating the possibilities of calling the material to life.” And come to life it does on the iconic fifty-inch canvas from 1953 of Sadamasa Motonaga (born 1922), beautifully composed with gravel and poured paint. Or on the equally monumental canvas covered with thick oil paint and plywood by Chiyu Uemae (born1920). Four other painters from that generation are also in the exhibition, and they use more traditional methods, but that uniquely Japanese concurrence of balance and surprise can be found in them all. Unfortunately, modern Japanese easel painting is hardly ever exhibited in American museums, much less in Chicago (it is more often seen in France), but the work of two contemporary Japanese ceramicists, Sueharu Fukami and Nakamura Takuo, are currently on display in both the Ando Gallery at the Art Institute as well as on the floor of this exhibition. The bluish-white aerodynamically shaped porcelains by Fukami (born 1947) are unforgettable, and this show has two of them. Seven other contemporary Japanese ceramic artists are also included in the show, making for a rather magnificent celebration of the first anniversary of Floating World Gallery. Up until now, this gallery has specialized in Japanese prints, but they are obviously as adventurous as the work they now have on display. (Chris Miller)