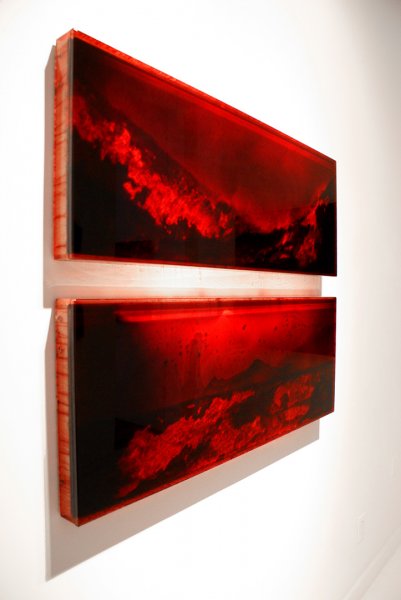 Cattle blood taken from slaughterhouses, Plexiglas and UV resin make up the components that Jordan Eagles uses to create his preserved-blood paintings. “Most people come into the studio and expect it to smell. It doesn’t even smell. I know,” Eagles says. In the past, he needed to leave the blood in Tupperware containers to get the blood from red to black. This would leave such an offensive odor he would have trouble breathing and would need a mask at times. This prompted him to develop a new technique for aging the blood.

In 2006 Eagles won the Gay & Lesbian Alliance Against Defamation (GLAAD) award for best emerging artist. His exhibition at David Weinberg Gallery is his first show in Chicago, with nine pieces on view. Their colors are exquisitely bold and rich, and each image is reminiscent of the solar system with sunspots, exploding stars, the cellular structure of the body, or fireworks.

“What I am hoping is that the viewer is drawn into it and the imagination starts to wander and starts to feel wonder in the material,” Eagles explains. “That experience for them brings them to a place to experience their own set of circumstances in spirit and body. What is also interesting is that you take something that is no longer living and it is killed and making something beautiful out of it.”

It all began in 1998 while Eagles was an art student. He got interested in images in a medical encyclopedia, in the chapter on birth, and began experimenting with blood on canvas. The reds became browns and the lines started to crackle, “so I started to think I should preserve the blood,” he says, solidifying it in resin.

“It is about the graphic layer of the movement and the subtle texture,” he says. Heating the blood and resin mixture at a certain temperature will generate a crackling effect. “If you take the blood and age it in a certain way, you can show a certain color. The pieces seem like a dense black and almost a deep purple. If you took it and threw it to the ground it would shatter like dry mud on a baseball field. It is kind of amazing. You do not think it would decompose that way,” he says.

Many pieces include copper mixed with the blood. “When copper is mixed with blood it creates a fiery sensation. For me copper jolts additional electricity and energy into the blood,” he adds. (Valerie Piotrowski)