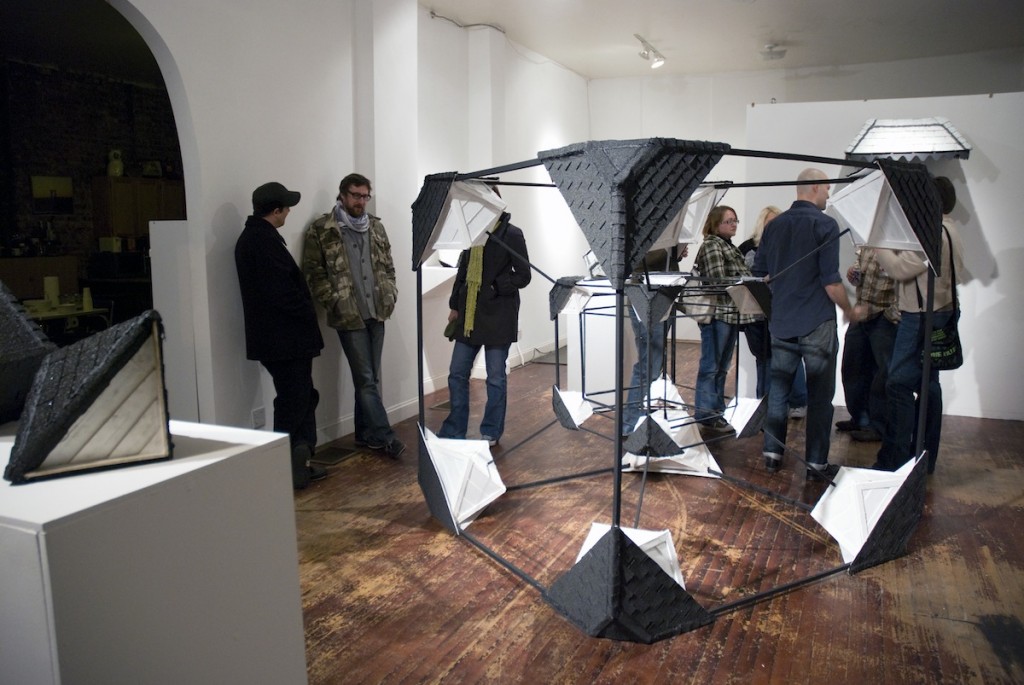 Artist Gordon Matta-Clark (1943-78) undertook a variety of projects, but may be best known for cutting apart abandoned and condemned buildings. He saw “un-doing a building” as a gesture against “the industry that profligates suburban and urban boxes as a context for ensuring a passive, isolated consumer.” In his literal deconstructions, Matta-Clark sought a “kind of architecture which incorporates this sort of animated geometry or this animated, tenuous relationship between void and surface.”

In “Home for a Hypercube,” the central piece in a show at Hungryman Gallery, Jacob C. Hammes suggests what might happen to that box of consumer isolation when planes and fissures in domestic space are tessellated into a tesseract, the geometric representation of the cube in four dimensions. Looking much like a smaller cube suspended inside a larger one (and, ideally, in motion such that the smaller cube repeatedly engulfs the larger), the tesseract, as “animated geometry” relates to the cube in the same way the cube relates to the square. In Hammes’ static six-foot-tall model, each of the sixteen vertices sports white siding and black roofing, formed into a tetrahedron (the shape of the four-sided die in Dungeons & Dragons). The other pieces in the show use similar materials—siding, roofing, awnings—to execute sundry polyhedrons and exercises in proportion.  One shape rests on a forked branch, and another on a shelf, while the rest are situated on the wall or on pedestals.  The only two-dimensional piece, “Broken Intersection,” features a hexagon of circles emerging from a painted simulation of wood-grain, a form that suggests Metatron’s Cube.  The inspiration for the show’s title, “Metatron’s Roof,” this cube refers not to a Deceptacon but to a sacred geometric figure, also known as the Fruit of Life, that can contain the five platonic solids. Of course nobody applied mystical geometry to domestic architecture more infamously than did Buckminster Fuller, but it’s worth remembering that the geodesic dome is just the latest secular manifestation of a cross-cultural obsession with profound symmetry in our most revered spaces. Of course, that’s now also the place where we sleep, watch TV, hang out in our underwear and generally avoid the rest of our kind. (Bert Stabler)