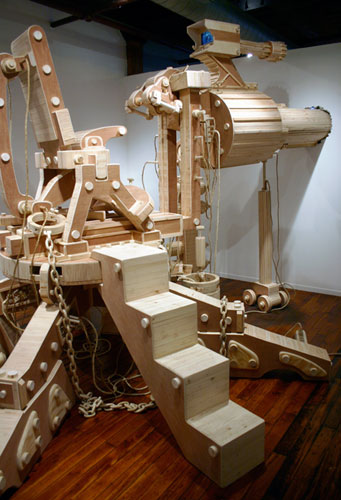 The barrel of a giant wooden artillery gun skewers the first room of Ebersmoore, crashing right through the gallery wall into the living space hidden behind. Named after the artist’s girlfriend, “Benita” unites the private and public in this intimate art gallery. Michael Rea’s conceptual gesture is overshadowed by the sculpture itself, constructed of wood in Rea’s usual attention to craft and humor. Here, Rea’s work again addresses issues of masculinity and heteronormalization. The massive barrel of “Benita” (around fifteen feet long) should more than compensate for any male shortcomings; the scope contains a small TV playing what could be a Tribune executive’s email, but turns out to be the steamy softcore shower scene from “Stripes.” The sculpture also functions on a political level—since the Supreme Court is removing all limitations to the second amendment, this gun could soon be coming to a store near you. Around the gun’s base are more all-wood sculptures: three kegs, a bong (already packed up with sawdust) and an assortment of machetes. With this setup, you can almost hear the hootin’ and hollerin’ of the good ol’ boys having a time down on the gun range. In the corner nearby leans “This One Will Take Off More Than Your Ear,” a triple-bladed sword that seems inspired by the massive swords of the Final Fantasy franchise. This exhibition also presents works on paper and two other sculptures, but by far the pièce de résistance is “Benita.” Rea gives us what most Americans seem to want, big guns, big boobs, bongs, kegs and knives. While realistic and functional where possible, the kegs can be pumped and their taps detach, the gun sights can be moved, etc., the pieces’ wooden nature reminds you that they’re all intensely artificial, but their real counterparts do exist. Rea creates artworks that are familiar and fun, but also critical. By returning our society to us, Rea forces the viewer to question whether this is the society we want. (Abraham Ritchie)