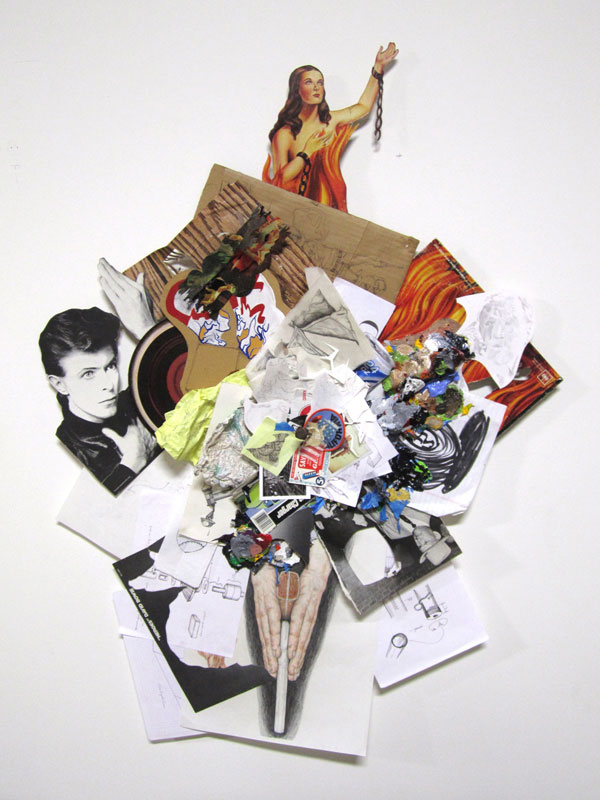 Zach Taylor and Aaron Williams have completely different ways of communicating. Taylor’s language is couched in the mechanical world, yet concerns itself with a journey rather than the mode of transport, a distance covered emotionally which is then embellished, infused with ulterior definition and given greater resonance by the straight-edged precision of text woven in by Williams.

The bulk of “Finished” is collaborative in just this way, image and word shaping each other, and where these two aspects seamlessly fuse is where the art really kicks and communicates something, though perhaps not always decipherable—sort of like this review—for how ultimately internalized it feels. I almost have mixed feelings about the show because it’s so good to look at that I was distracted from interpretation. The work was resilient to associations—despite the nostalgic imagery of Jiminy Cricket and the Land O’ Lakes mascot—so initially I could only admire the way paint was perfectly calibrated on canvas, the technique employed and the sheer physicality that occupied the gallery.

Because of how attracted I was to these images and contraptions, however, I found it impossible to dismiss the show as eye candy; rather, it needed time to sink in until it hit bedrock, until the work spoke to some part of me. When it finally landed, I was struck by the overall sadness of the work, even though it wears a Technicolor coat of propulsive electricity. These paintings and interactive sculptures all seem to be about saying goodbye, and to more than either of the artist’s singular will at the behest of collaboration.

For example, the Redmoon-esque massive handmade bicycle, “Exercise in Failure,” destroys the records spun on its wooden turntables when the bike is pedaled, while vaguely aquatic sounds pour out of the Victrola horns which snake from the body of the piece. Beautiful to see, haunting to hear, it felt like a very adult farewell to childhood innocence, an intimation of the malleability of memory under the speed of passing time.

What actually is finished—perfectly elucidated—in this show is not any particular piece with intent to illustrate one specific thought, but rather the overwhelming delicacy of moving, of carrying on with your damn life regardless of whether or not those steps we take are forward or back, whether or not we choose to mark them with our own privately symbolic images or words; only that we move. (Damien James)