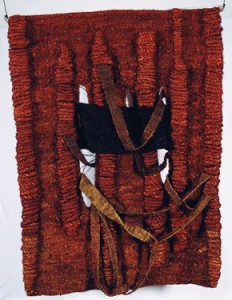 The Art Institute’s newly reopened textile galleries present “Contemporary Fiber Art: A Selection from the Permanent Collection,” but the show’s use of the term “contemporary” refers only to a range of dates rather than a practice, or the making of thought-provoking and forward-thinking fiber arts. This might be due to the fact that out of the sixty-one works on display, more than half are traditionally woven, and the abstract works seem like decoration. Contemporary fiber art does more than just root itself in tradition; it uses that tradition as material to address vital issues such as gender, race and labor.

One of the hurdles for early fiber arts being considered fine art was that it was thought to be utilitarian or decorative. For instance, Lyn Inall’s 1993 quilt, “Denim Cubes,” pieces together denim bits from commercially produced jeans complete with their original seams and buttons to depict a geometry of stacked blocks. This work does little to investigate quilting as a potential method for critiquing who wears denim, and why, and how. Instead, the denim quilt is a neatly constructed object composed of reused excess fabric, which is the traditional nature of quilts. It’s an unfortunate piece for display while a work by renowned quilter Faith Ringgold remains in storage.

The show does boast such fiber greats as Sheila Hicks, Magdalena Abakanowicz and Lenore Tawney, artists who fought the good fight to insert fiber work into a painting and sculpture-dominated field, but it becomes clear that the Art Institute served as a fair-weather friend when it came to collecting “contemporary” fiber works. Many pieces were acquired in the 1960s and 1970s when fiber arts had already earned respect but the Institute made some questionable purchases, like the show’s small-scale weaving by Abakanowicz. Titled “Brun Rouge” it recedes on the wall, though the artist is best known for her large-scale “Abakans” series that engulf viewers. Perhaps this show will serve as an example for future collecting/curating and push the Department of Textiles at the Art Institute of Chicago to take more risks, the kind that fiber artists have had to take to legitimize their field of practice. (Karolina Gnatowski)

Through February 7 at the Art Institute of Chicago, 111 South Michigan.

I also noticed that a different definition of “contemporary” seems to have been applied in the fiber art gallery as opposed to the Modern Wing. The selections currently on display even include a sweet, angelic image that almost looks religious. But is this such a bad thing? The museum is just extending its notion of “encyclopedic” into our own time, allowing for a greater variety of artistic aims. I just wish the museum would allow photography in that area, since many of the gorgeous pieces now on temporary display may not go back on view for several decades.