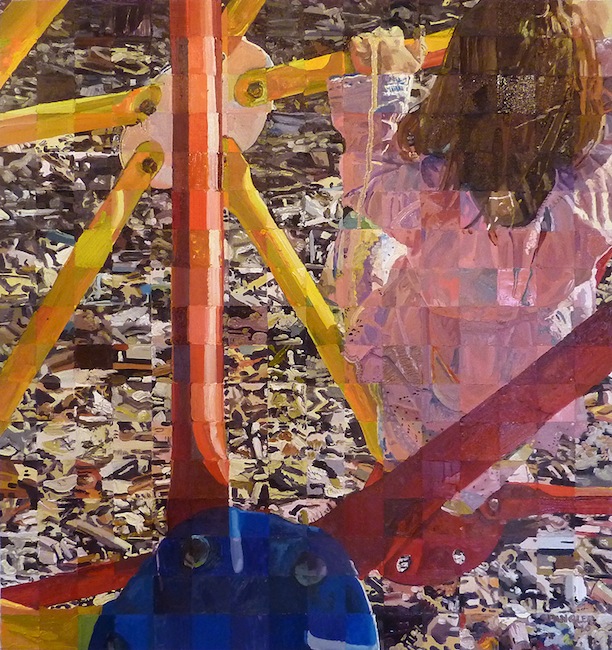 As days shorten, streets turn cold, and skies turn even grayer, Joseph Spangler (born 1976) returns to Chicago for an exhibition of his new work and new life as a young father in Portland, Oregon. His earlier Chicago work was all about our big, blue-collar, rust-belt city, and some of his rather grim, stark, lonely cityscapes are included in this exhibition. They all have that strong sense of design that got him picked up by a Michigan Avenue gallery a few years after he graduated from SAIC in 2000, but Chicago urban landscape is a crowded genre, with many talented practitioners over the last century who have found more to love about our sophisticated, bustling metropolis than he has. His new genre, scenes of family life, is also crowded—but nowadays it’s crowded with the kind of sentimental photo-realism that might make a demanding viewer more than just a little nauseous. Spangler has gone in a different direction, breaking up his canvas into a grid of small, color-filled squares, producing the rich, sensual effect of a mosaic or tapestry. Indeed, Spangler’s strong, angular designs would translate quite well into other mediums and, perhaps, like June Wayne, whose narrative tapestries are now on display at the Art Institute, he should collaborate with the weaving ateliers of Paris. This is not to say that his designs are not also effective as oil paintings. They celebrate the healthy/hopeful/normal instead of the demented/hopeless/weird side of the human condition, and that’s a bit unusual for a Chicago painter. Is that why he moved to Portland? (Chris Miller)