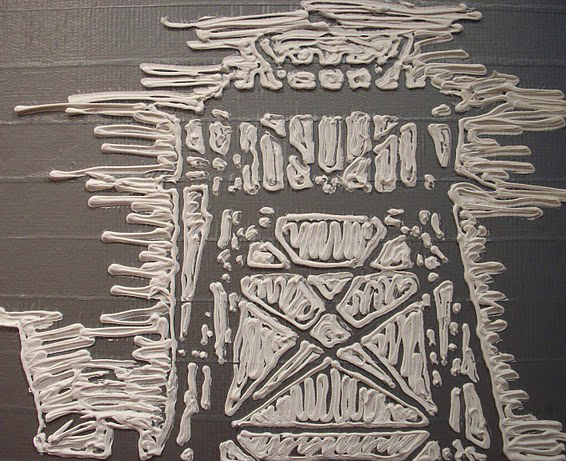 Ethereal can mean delicate, insubstantial, or otherworldly. In “Light and Air” at the Chicago Artists’ Coalition Gallery, each artist’s work reflects upon the different facets “ethereal.” Connie Wolfe’s abstract hand-cut ink-jet prints suspended just inches off the wall appear fragile and delicate like wisps of rising smoke. Robin Dluzen’s paintings of water towers and telephone lines are surprisingly insubstantial despite their subject matter and their materials—mainly caulk and duct tape. Zach Mory’s remarkably intricate graphite drawings describe imagined worlds of exploding stars and ribbons of pattern. Despite the different materials and imagery used by each artist, the stylistic similarities of these works make this show cohesive. Recent group exhibitions at CAC gallery have lacked this level of coherence, but this show is a pleasing exception. The level of detail in Mory’s graphite drawings and the labor intensity of Wolfe’s cut prints contribute greatly to the coherence and quality of the exhibition.

Dluzen, Mory and Wolfe each blur the line between the organic and the industrial by laying curvilinear pattern over rigidly architectural frameworks. The best works by each artist reverse the relationship between these two poles, such as Dluzen’s “Watertower (Chicago) no.2,” a painting of a water tower’s silhouette outlined in goopy-looking off-white caulk on plastic sheeting stretched over an exposed wooden frame. In “Adrian, Michigan,” Dluzen makes a chain link fence appear like a porous, filmy web once drawn in clear caulk on a plastic dropcloth and suspended in the middle of the gallery. A similar tension between the fluid and the solidly architectural exists in Mory’s large graphite drawing “Hive,” which appears from a distance like liquid spilled across the page, but upon closer inspection, geometric patterns emerge in this shimmering puddle of graphite. In Wolfe’s vaporous graphite drawings on vellum, such as “Ghosts,” the curving patterns in her work are juxtaposed against the solidity and framing of the gallery itself. The image and the page not only fade in and out of each other, but also barely separate themselves from the gallery wall. “Light and Air” offers three artists’ perspectives on the ethereal while transforming industrial materials and geometric structures into delicate plumes of pattern. (Regan Golden-McNerney)

Through December 3 at the Coalition Gallery, 2010 West Pierce.