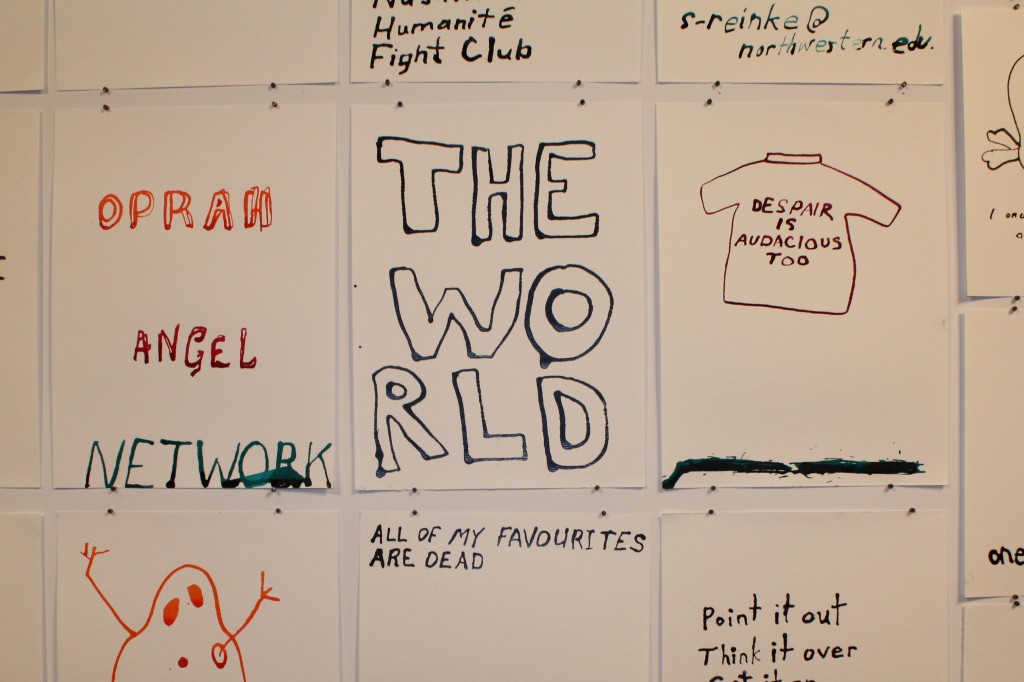 Gallery 400’s exhibition of new work from Steve Reinke and collaborators Dani Leventhal, John Marriott, Jessie Mott and James Richards manages to be both sardonically funny as well as often unexpectedly and profoundly confrontational. Centered around an hour-long suite of Reinke’s new video work, which mixes moral interrogation with humor, ironic voiceovers and Beckettesque failures (my favorite: “cartoon for those who have a certain fondness for ideas, but are tired of thinking”); but it’s the work in other media that’s ultimately the most moving. Neon, needlepoint and mixed-media collages reference Bruce Nauman in a way that’s thought-provoking and unaffected; a study of Peanuts cartoons as repeated objects echoes a message of futility that F. Scott Fitzgerald once articulated as the combination of seeing that things are hopeless but being determined to make them otherwise. Detournement finds its strongest application in “Guernica,” which combines a doodled copy of Picasso’s painting in gel medium with a found photograph of a vulnerable, half-naked young man in a sailor hat in front of a poster reproduction of the painting. Solo work by Reinke’s collaborators is less moving but still wry examinations of sex and death from a more comfortably ironic viewpoint. (Monica Westin)

Through December 18 at Gallery 400, University of Illinois at Chicago, 400 South Peoria.