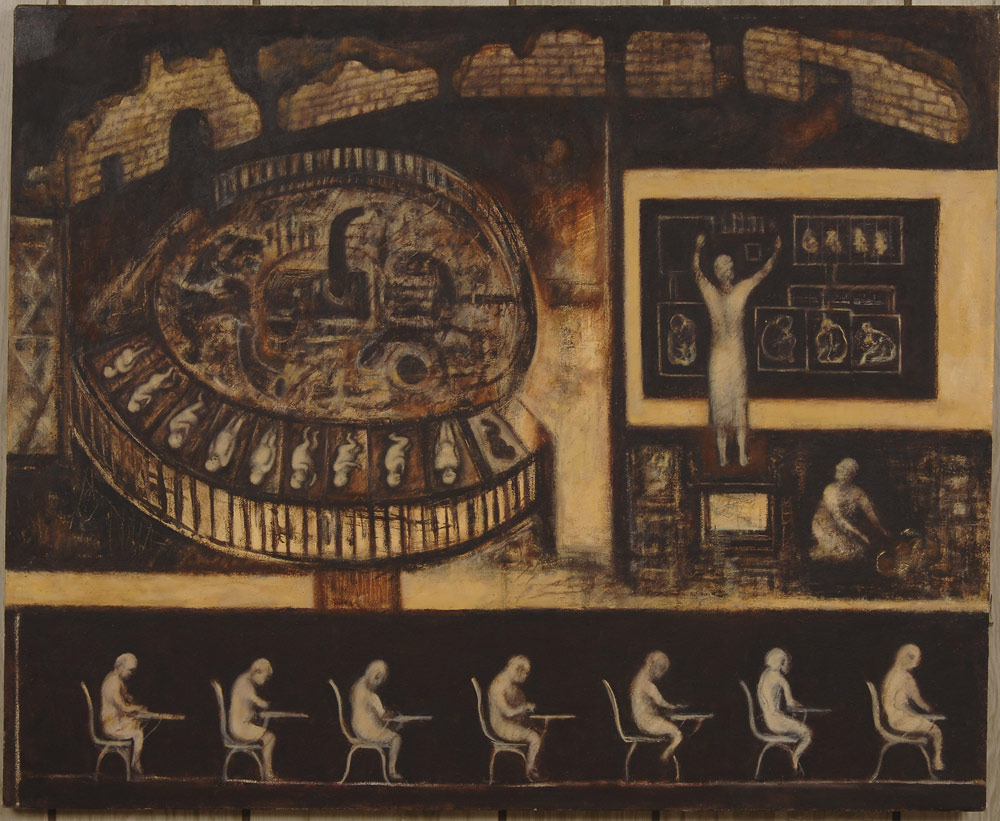 Social and political art these days is often oblique, using ambivalence and irony or subversive subtextual turns to make attenuated points. Rebecca Wolfram, whose paintings are at La Llorona in an exhibition called “Cruelty has a Human Heart,” are pretty straightforward about what used to be called ‘man’s inhumanity to man.’ Wolfram might not agree with the concept of inhumanity since it is clear she is also very concerned with the cruelty men and women visit on animals. Her highly worked, textured canvases, whose spaces are reminiscent of Egyptian friezes, are filled with naked (but desexualized) huddled people, often children or babies, negotiating strange, not exactly Piranesian, but precipitous lightless carceral spaces, struggling to do things which seem recognizable but which one can not actually name. There is some evidence that the manacles are, as Blake says “mind forged,” but other paintings of women being lead away in branks­—a metal device with a spike inside the gag to pierce the tongue fitted around the head of a termagant woman, favored by the Puritans but used by others—are quite specific. A series of small works depict the painfully twisted faces of people who strain against the merciless constrictions of the branks. Repeated friezes of forlorn school children, tormented animals and infernal machines, and one of my favorites, a group of people portaging an upside-down car, add to the dystopian carnival. Wolfram’s work is reminiscent of Leon Golub’s in both subject and technique, but on an intimate scale. Layers of scrapings, drawing and reworkings through yellows, reds and blacks build up her surfaces, and unlike Golub, some lyrical moments—gracefully falling figures, hopeful passages—are redemptive, not in a religious, but in a humanistic sense. (Janina Ciezadlo)