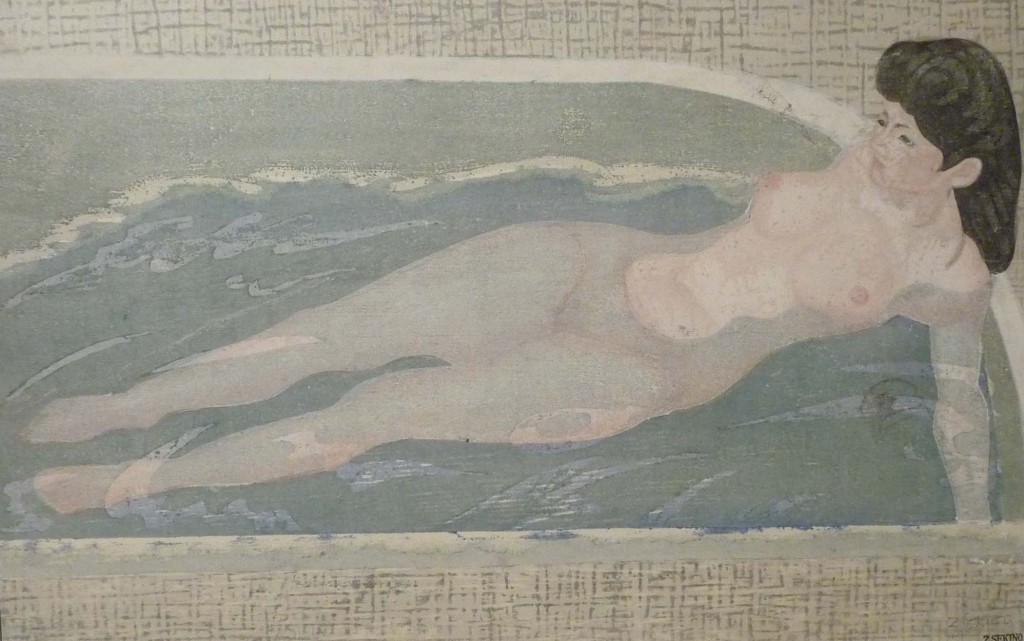 “Lost troves” appear so often in the secondary art market one wonders whether their amazing rediscovery has something to do with marketing. Whatever the reason, several dozen early prints by Jun’ichiro Sekino (1914-1988) have recently surfaced in Chicago. They are a remarkable collection of work done during the dark days of Japan’s failing empire by a young artist in his twenties, and are augmented by some equally remarkable postwar prints that Floating World Gallery is not offering for sale. It’s a real festival of rambunctious creativity by a printmaker who would later become distracted by commercial success. Many of them are one-of-a-kind monoprints, and many of them are of nudes, done in a peculiar, lively style that is a hybrid of Japanese and European, though owing a bit more to Picasso and Matisse than to Utamaro and Hokusai. Sekino spent the war working in a munitions factory, and you can just imagine him racing home every night to sketch his nude young wife and then playfully incorporate her image into the art traditions he had learned from many masters. One such master was Koshiro Onchi, the founder of that modern movement in Japanese woodblock printing called Sosaku Hanga, which requires the artist to carve the block and print the paper as well as draw the design. Several versions, including the preparatory drawing of Sekino’s famous portrait of Onchi, are included in this exhibition. Sekino’s early work is all about joie de vivre, and these pieces are more like paintings made with ink-brushed woodblocks than they are printed editions. It should also be noted that all these works on paper are displayed here without that annoying protective glass that is so necessary in art museums. Unfortunately, the freshness of Sekino’s excitement would not last beyond the 1950s. Eventually, he would become more like the manager of a bustling commercial studio and less like a fine artist. But doesn’t this happen in many facets of culture? (Chris Miller)