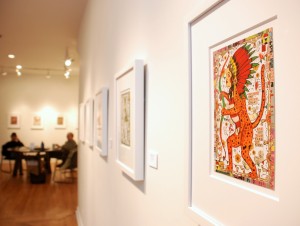 Remove the gigantic printing press, the paints and the papers, the file cabinets and the odds and ends. Repaint the walls, sand and stain the hardwood, add some track lighting. Reveal the open space.

After seventeen years as Tony Fitzpatrick’s studio, the space at 2124 North Damen now serves as Firecat Projects, a for-profit, commission-free gallery, as well as a publishing house. (Fitzpatrick’s moved his studio into his home.) A road trip from Chicago to Los Angeles gave Fitzpatrick and his art partner Stan Klein 2,000 miles of moments to discuss the formation of a rare gallery model that nurtures both artists and buyers, one that eliminates the intermediary and brings the public directly to the artists. Fitzpatrick, whose work was featured in the debut show at the gallery in November, quotes Mahatma Gandi: “Be the change you wish to see in the world.” Or, in his own words, “Put up or shut up.”

Klein, who owned a frame shop in Chicago from 1978 to 1999, then served as assistant to the artist Ken Noland for six years (he also worked on and off for Andrew Wyeth) before hooking up with Fitzpatrick, says, “Why have all these middlemen saying ‘This is our price?’ It’s disrespectful to the artist and to the [buyer]. This way, the artists get the exposure and build their clientele. We won’t take anything.”

For the first two years, Firecat Projects will allow artists to display their work for one month at no cost. The gallery will print and distribute cards and posters, post updates on its website and Facebook page—”that’s the great thing about having fifteen artists who have been doing this for a while,” Klein interjects. “You take 2,000 Facebook contacts from fifteen people, now you have 30,000. It’s a social art network”—and host an opening reception. Come 2013, the entrepreneurs will ask the artists to consider investing as much as $1,500 a year for a guaranteed biennial exhibition. Even at that level, the gallery won’t throw off much more than rent money; profits are expected to come from the publishing business.

Galleries, especially in the past twenty years, Klein says, tend to base their artistic decisions on economic foundations. They often are not willing to exert the time, energy and resources for one exhibition that garners little profit for the gallery, despite the fifty-percent commission they receive. Plus, Klein says, many artists do not fit that commercial mold.

“We were perplexed why [some of these artists] weren’t getting more attention,” Fitzpatrick says. Klein elaborates: “They hit a niche that doesn’t fit into the organized scheme of art. They’re not this, they’re not that. They’re just individuals,” he says of the fifteen-or-so artists Firecat will exhibit in coming months, about a third local and two-thirds out-of-towners. “We really wanted a place to foster that, to help them get better exposure. We want them to be part of it.”

Their first visiting artist, Randy Regier, a multi-dimensional print and installation artist from Maine, analogizes the commercial gallery owner to the car dealer who swindles customers for the big payback. His history with such galleries has revealed that “no matter how much they like [the art], they won’t risk having a show if they don’t generate revenue.” But with this model, he explains, “I run a similar risk. Maybe I won’t sell anything, but the thing is, I’ve already laid it all out there to do this.”

Regier, and future Firecat artists, will shoulder the responsibility of pricing their artwork and negotiating with potential buyers, in a space where they can show what they want, how they want, with the support of seasoned art professionals at the helm. For Regier, the partners’ reputation and experience makes the choice to work with them an easy one.

Another arm of Firecat Projects is a new publishing company of art books, poetry and novels. Partnered with designer Dawn Hancock of Firebelly Design and art assistants Tanya and Brian Galin, the team just released Fitzpatrick’s “This Train: An Artist’s Journal,” and currently has eight books planned for distribution to other galleries and art institutions across the country, including the Museum of Modern Art in New York and the Art Institute of Chicago.

As for the gallery, artists are scheduled through the end of next summer, with additional shows in discussion. “Each show will have its own unique, individual stamp, and that’s what we’re really proud of,” says Klein. “These are people who are putting themselves out there…and we’re totally confident and lucky to have them here.”