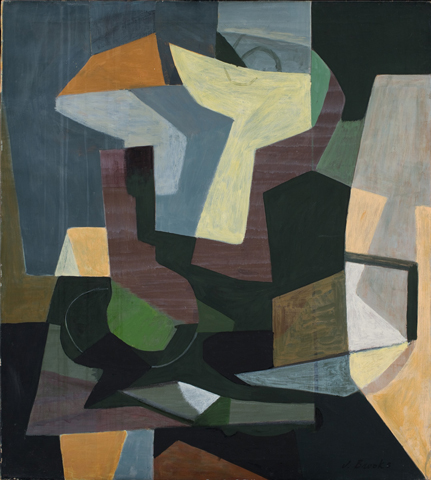 Abstract Expressionism was the big art news of the mid-twentieth century, at least as far as America was concerned. Breaking free from the materials and techniques, as well as the political, religious and aesthetic ideals of shattered Europe, Ab Ex epitomized Walt Whitman’s “Song of Myself”—however confused, voracious and gnarly that self might be. Since anyone, even elephants or chimpanzees, can express some kind of un-fettered self-hood, it was also the triumph of American marketing, as it established one brand of self expression over another. James Brooks (1906-1992) was right in the thick of it, sharing a studio with Jackson Pollock, and joining sixty other progressive artists in Leo Castelli’s groundbreaking Ninth Street Show of 1951. But where many of the artists from that show would soon become iconic names in art history (de Kooning, Pollock, Frankenthaler, Motherwell, Reinhardt, Rauschenberg, Hofmann), Brooks never quite made the “A” list, perhaps because his work was not so much puzzling and confrontational as pleasing. He really had an eye for graphic design, whether applied to the social realism of his early murals, or to his later lyrical abstractions. But during the late 1940s, Brooks just couldn’t avoid being one of “The Irascibles,” and this is the period now on exhibit at Valerie Carberry Gallery. Many of the works on paper express a hectic, compulsive urban anxiety and one of the oil paintings, “The Destroyer,” bluntly begs for psychoanalysis to speculate about the angry women in his life. Others more closely resemble the Bauhaus ideal of clean, sharp industrial design, and one, “Christmas Fantasy,” is ebullient and upbeat. So, like the social realism of an earlier decade, these twenty pieces might serve as a quivering slice of American life. Not life in the factories, farms or small towns, but the inner life of one Midwestern man who went to New York to become an artist. There was anger, chaos and turbulence. But also joy and beauty, and that may be what Brooks will most be remembered for. (Chris Miller)