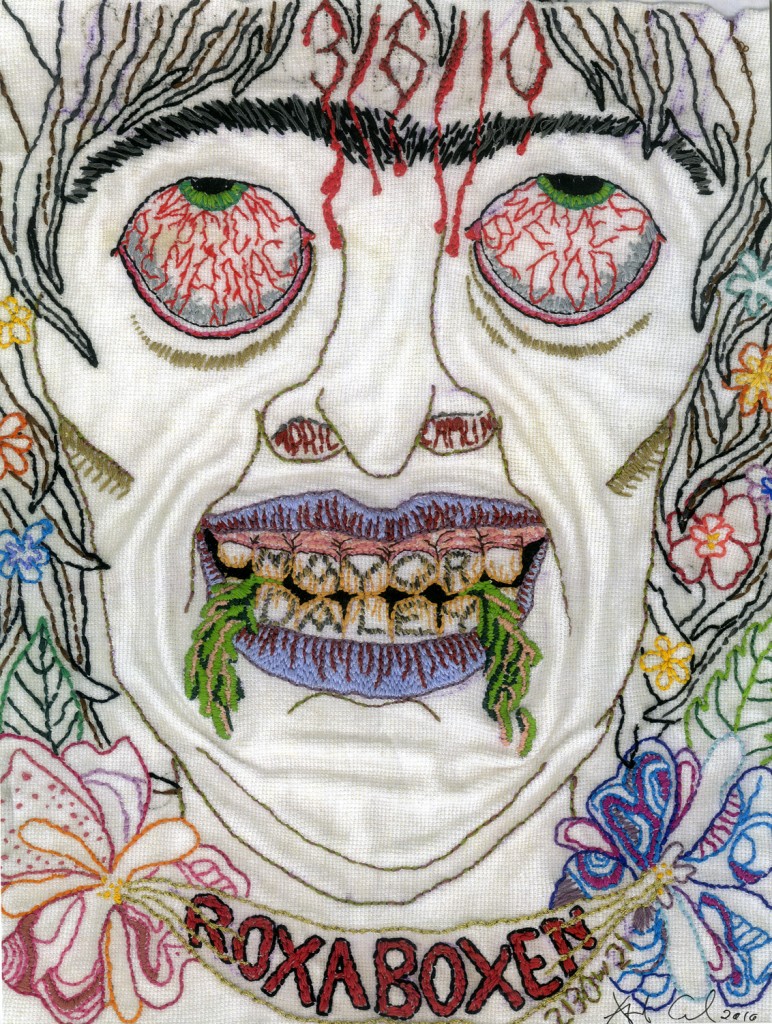 Roxaboxen gallery’s obscure location on a residential stretch of 21st Street in Pilsen ensures that only those who already know it’s there are likely to come across it. Which seems appropriate in light of Roxaboxen’s most recent exhibition, the “Best of 2010 Poster Show,” a retrospective of Chicago DIY concert posters for 2010, which constitutes a chronicle of an underground artistic community that depends on a certain degree of anonymity for its survival.

Indeed, Roxaboxen resident and artist Liz McCarthy is hesitant to even name the DIY venues where many of these shows take place without including the proviso that any mention of them in print exclude location. This tension, between the need to promote and publicize these events and the desire to keep them off the radar, is well represented in the medium of the poster, which allows organizers to reach their community without bringing on too much heat.

As McCarthy explains, “There’s almost this tribal aspect about it, like there is this group of people that all have these shows, especially in Pilsen, Wicker Park and Logan Square and they’re all interconnected and know each other. It’s a good way for a community to interact with each other and communicate not just ideas about the culture informing that community, but also events and gatherings.” The posters of the Roxaboxen show, then, represent a very insular form of communication, one that takes place at street level, placed as they are in the coffee shops, nightclubs and unguarded building fronts which comprise the interstitial geography of an often-hidden urban music culture.

Reinforcing this focus on community is the very fabrication of the posters. The prime criterion for inclusion in the exhibition is that each poster be made by hand. The result is a wonderful array of idiosyncratic designs, reflecting the intimacy of care rather than the technical coldness of mass production. A lap around the gallery reveals the surrealistic, analog collages of Sarah Mosk, the punchy characters of Ryan Duggan’s hand-registered prints, the eye-grabbing, sex-themed silkscreens of Josh Davis, Ruth Oppenheim-Rothschild’s Xeroxes of her own freehand drawings and the psychedelic embroidery of April Camlin, who has been known to spend two months on a single poster.

McCarthy sees the collection as representative of a truly Chicagoan “poster culture,” which she associates with those “people that participate in poster-making, the bands and collecting.” The interconnection of the visual art and musical communities is reflected in how many of the exhibited artists actually play in bands existing within the scene they try to promote with their posters. For instance, Camlin plays in the band Wumme and Duggan plays for Loose Dudes while members of local bands Cacaw, Cave, Forced Into Femininity and Reddelicious are also represented.

The “Best of 2010” show would not have been possible without the support of Andrew Martinec, who loaned many posters to the exhibition from his personal collection (though none of his own art is on display). Martinec has plenty of reason to pay attention to show posters, playing, as he does, for Chicago groups Arts of Life, Bad Drugs and Blood Mambas. As McCarthy tells it, Martinec collects “posters from all his favorite shows and also all the shows that he plays.” For Martinec, it is a way of cataloguing his life, which speaks to the broader implications of the poster medium.

Posters take on a dual life: they are initially created for a practical purpose, but also embody a range of contexts—from the aesthetic to the symbolic to the geographic—that only come to light when seen outside the immediate context of their original use. Ultimately, the show is very similar to a concert, which exists as both a finite moment in time, but also as a concentration of a larger piece of the life of an individual or a community in the way that all the creative energy which led up to its happening is bundled in the memory of that moment. (David Wicik)