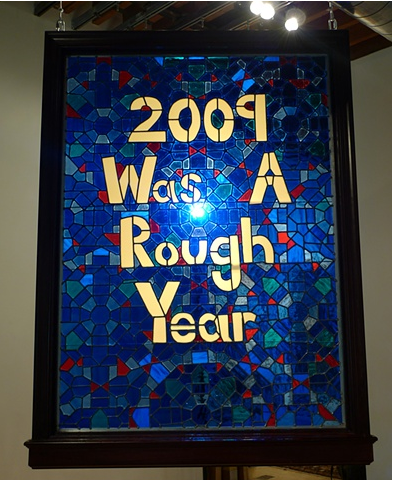 A full year past, we reflect on that which once was, that which persists, that which may be. Lilly McElroy’s second solo exhibition at Thomas Robertello Gallery honors 2009, a year that, for many, typifies economic unrest, unemployment and home loss. Even for those of us unscathed, a new year carries new possibilities, new responsibilities, and McElroy urges us to reflect on a year’s worth of hardships with the quips of another. She set up a website (aroughyear.com) to solicit others’ images, stories and jokes that epitomize their most painful moment, or in some cases, their triumphant reclamation.

McElroy describes her artistic mission as an interactive attempt to make a connection with her audience, and she is accustomed to participatory art. Her inspiration for soliciting photographs, she says, may have emanated from a past project for which she asked her mother to photograph twenty-four reasons why she loves her, using nothing more than a disposable camera.

User-generated content leaves the end result a bit, well, open-ended: “I was expecting so many more images of home and job loss,” McElroy says, “but I was actually really surprised about [the stories of] heartbreak. For people who weren’t experiencing those economic stresses, [2009] was equally rough but in a very different way. It made the project much more interesting and much more complicated.”

McElroy spread the word of her developing project by posting ads in Craigslist and Coffee News, distributing flyers to cafes, “emailing anybody who had ever emailed me about anything,” she laughs, and even snail-mailing strangers chosen at random from old phone books. “I got a lot of responses asking who I was,” but her breadth of personal connections and that of friends and family catalyzed the project’s dissemination, fashioning a potent spiderweb chronicling a year in the life. 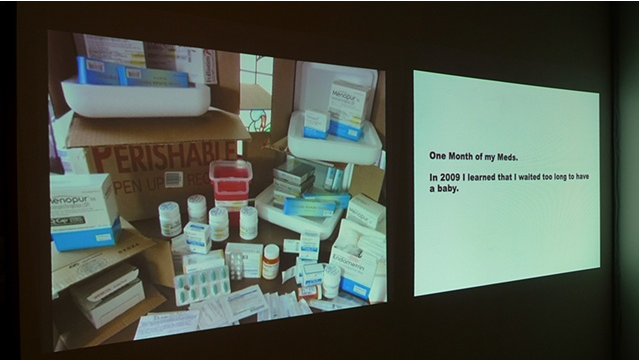 A disgruntled face; the medicine cabinet of an infertile woman who wanted to have children; the overflowing recycling bin of an unemployed couple; a stillborn baby; arms raised for a newly sober friend; a rejection letter surrounded by flames; an animated poster of hopeful vignettes. More than 100 photographs and a few paintings comprise the user-submitted portion of McElroy’s exhibition, projected onto the wall. Some have attendant stories, some do not; a handful have names, but most are anonymous. For McElroy, “pain is subjective,” however auspiciously egalitarian that may be, she admits. “It’s really important if those different degrees of pain, those different experiences hit. They are equally significant for the people who are experiencing them.”

She hoped the experience of sharing that despair would be cathartic, that offering a personal image to a public collective would be comforting for both contributors and viewers. Even the artist herself submitted an anonymous photograph, to be fair she says. A small number of people have contacted her after viewing the collection online; one contributor said, “I like it but I will never look at it again;” once McElroy cried. She goes so far as to divulge an obligation to protect these images and stories: “There is this moment of being responsible for other people’s [work] and wanting to do them justice. It’s incredibly generous and trusting for people to share these things with you. It’s a lot of pressure to take care of it.”

With the exhibition of McElroy’s archive, another is coming into being. Jason Lazarus is asking people to anonymously donate photos that are “too hard to keep,” tarnished by lost love or weepy memories, which he is re-presenting on a website (toohardtokeep.blogspot.com), without commentary. Both McElroy and Lazarus are keenly tapping into the communal melodramas and confessionals that so vividly trigger pathos on television.

At the gallery, the central point of McElroy’s exhibition is a deep-blue stained-glass window, inscribed with the lightly golden “2009 Was A Rough Year,” hanging from the ceiling, illuminated by a spotlight that disperses the message throughout the room. The four-by-six-foot window is McElroy’s response (“me acting as some sort of weird filter”) to the images and stories she received. “I wanted to segment it but make it feel complete, the light patterns on the wall separated from the slideshow, have it bleed together a little bit,” explains McElroy.

In addition to the slideshow and the window installation, a television plays video of the artist performing standup in New York City (her new home), a gauche routine of user-submitted jokes. Along the lines of “giving clichés new meaning, with laughter being the best medicine,” says McElroy, “the jokes are an effort to fix things, to make people feel better.” She paints her replication of these jokes in a modest manner, simultaneously dogged and blasé, admitting that sometimes things work and sometimes they don’t. “It’s like having that moment of, ‘OK, that was horrible,’ but let’s do something that might potentially lift your spirits, or fail miserably.” She says the most significant facet of the comedy video, especially as it relates to the rest of the exhibition, is that her audiences were completely unaware that others had given her these jokes to tell: “I was trying really hard to be funny.”

Perhaps above all, McElroy stresses that she did not edit or omit anything. She will also supplement the current collection with belated photos, and plans to continue receiving contributions indefinitely: “I like that the meaning will change, that it [2009] will become more and more of a distant memory, the window more and more absurd, a monument to something that happened a long time ago.”