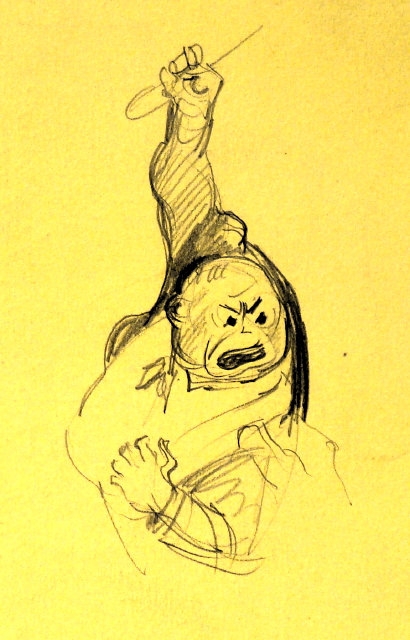 Alfonso Iannelli (1888-1965) may have been too precocious for his own good. Apprenticed to Gutzon Borglum (Mt. Rushmore) at the age of 12, he was fabricating stained-glass windows for a vaudeville theater in Los Angeles ten years later when the owner asked him to design posters for upcoming shows. Combining the dynamic geometrics of the Russian avant-garde with sharp figurative characterization, this work caught the eye of John Lloyd Wright who recommended him to his father, Frank, back in Chicago. Soon Iannelli was sculpting the playful “sprites” on FLW’s legendary Midway Gardens in 1914. Eventually, Iannelli opened his own studio in Park Ridge where he designed everything from theater interiors to vacuum cleaners to architectural sculpture. His most visible work in Chicago was one of his last public pieces, the Rock of Gibraltar relief high up on the side of the Prudential Building that faces south towards Grant Park. Currently, his sculptures can be seen in both the Art Institute and the Smart Museum. He may have never become an icon of Modernism, but all this time his fertile brain was fascinated by form and content in the modern world, as evidenced by many of the sketches discovered in his office files and now on display at ArchiTech Gallery. They include cubist fantasies, as well as geometricized caricatures of lawyers, musicians and pretty young city girls. There are also a few watercolor abstractions that could hang beside the work of Arthur Dove or Charles Demuth and industrial cityscapes that compare to Charles Sheeler. Ultimately, one wonders whether too much of his time was spent in the commercial design of toasters and hair clippers. He enveloped his expressive figuration within designs that were more dynamic than either the isolated figures of our neo-traditional figure painters or the strong but static patterns of our Imagists. (Chris Miller)