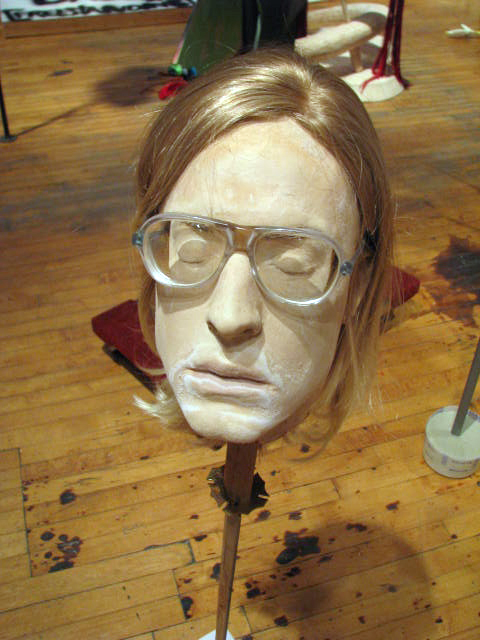 “HEAD + POLE + BASE [FREESTANDING] 3-8 FT TOTAL HEIGHT.” This spray-painted text scrawls across the base of Ali Bailey’s untitled sculpture in Western Exhibitions’ new group show, “Heads on Poles.” The simple instructions represent the initial call for artists’ participation made by Paul Nudd and Scott Wolniak, who then refused to further guide submissions from the sixty artists or censor their final works. The two curators hoped this freedom would invite contemporary explorations of the iconic severed head that elevated its meaning beyond savagery and “cautionary symbolism” to a “formal art—a 3-dimensional image-object, laden with material and conceptual possibility.”

Displaying the resulting totem heads in dense groupings, Nudd and Wolniak seem to invite facile interpretations of the show as mere ritualistic spectacle. Upon wading through the collected mass, closer inspection of individual works reveals a diverse range of practice and subjects. While Mike Diana and Chris Kerr comically skewer the heads of well-known pop culture figures, affixing a bleeding George Bush to a phallus and Smokey the Bear to a log, other artists mine grotesque and decaying imagery, such as Rachel Niffenegger for the puckered skin of her “Harry Eye Hole.” In his “A Dream of a Religious Man,” Andy Moore cleverly inverts the physical relationship of head to pole, using a thin cord to connect the floor-level head of a Jesus-like figure to a mounted piece of blue paper detailing his dream amidst cloudy whiteout blotches. 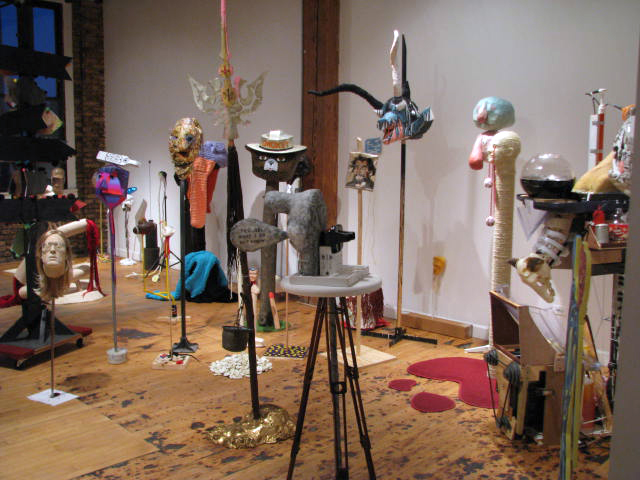 Interspersed between these more corporeal representations are a few conceptual works, which still imply a body, whether in description or form. A rhinestone-studded metallic blob, by David Legget, and a plain black box, by Vincent Como, are respectively labeled “Prince” and “Untitled (Witch’s Head).” Mike Andrews’ assemblage nests knitted yarn on top of a pole and its “I need more” title further personifies the work. Given the possibilities unleashed by Nudd and Wolniak, I had hoped that more of the completed artworks would push the show’s concept even further, questioning established understandings not only of severed heads but also “head + pole + base.” (Laura Fox)

A similar project of “Heads of Poles …. laden with material and conceptual possibility” was initiated 60 years ago, and the results can still be seen in front of the Chicago Merchandise Mart:

Though they all lack the comic polychrome splendor of the current exhibition, most (but not all) of them do look pretty ridiculous perched up on their tall, narrow columns like cherries on the end of monumental swizzle sticks.