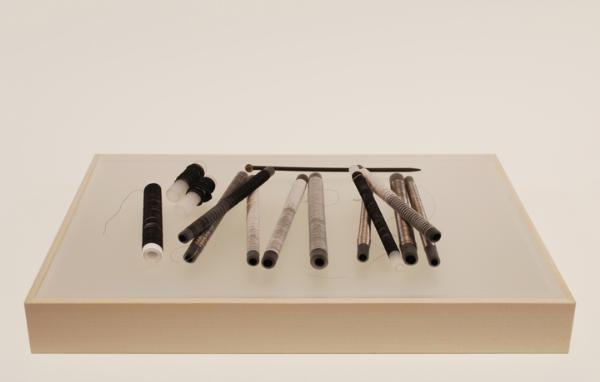 In her new exhibition, “Rewinds,” at Rhona Hoffman Gallery, Anne Wilson showcases an artistic practice rooted in hands-on processes of making, forming and creating. Wilson reintroduces a visual vocabulary relying on depictions of sewing tools and ephemera to advocate for the contemporary relevance of craft-based production in material culture. Rather than rely on a kitsch or homespun style, she communicates through starkly beautiful minimalist forms and surfaces that have almost clinical suggestions. Although previously known as a textile artist, Wilson explores a new medium for this show, glass, that when molten can be similarly woven, shaped and spun.

Half of the space in the gallery’s main room is occupied by Wilson’s eponymous “Rewinds” sculpture, a series of horizontal glass panels forming a raised sterile surface. Wilson littered the long minimal expanse with handcrafted glass forms that reference small sewing bobbins, specifically rewinds, which are spindles wound with leftover thread. Implying an interrupted or paused action, these static remnants of labor are clustered seemingly sporadically, forming a type of topographic assemblage that could be a sewer’s careless workspace. Kneeling pads positioned at both ends encourage onlookers to become participants in this space and its suggested fabrication work. 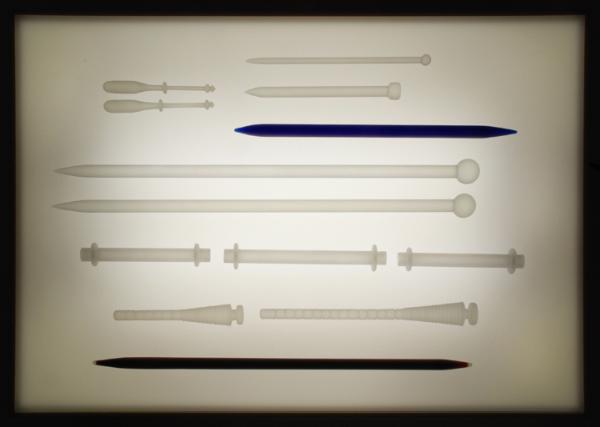 In her artwork, Wilson often references a finished product, while only presenting its raw materials. This interplay emphasizes the transformative process needed to make something, rather than the produced thing itself. For example, the show contains four bobbin-filled vitrines titled after the type of completed weaving each combination would form, including “Stripe in Black and Clear,” “Stripe in Gray, Yellow, and White,” and “Pick-up Stripe with Pink.”

Wilson stresses the individual actions embedded in each process as well. Drawing from Richard Serra’s list of action verbs for creating sculpture, “Verb List Compilation: Actions to Relate to Oneself,” Wilson’s “To weave, to wind, to knot, to knit, to twist, to push, to pack, to press” displays sixty-eight unique tool-objects, each seemingly imbued with a utilitarian purpose. The ultimate functions however are unclear and thus provoke diverse readings, suggesting tactile textile production but also surgical sciences and even Victorian gynecological implications. Another piece, “Tools for Soft Materials,” calls into question whether the worked material is fabric or flesh. (Laura Fox)