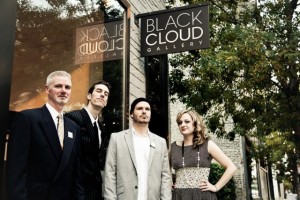 With more than two-dozen art galleries located in one neighborhood it can be difficult for the new kid on the block to stand out from the crowd. Throw in an economy slowly climbing its way out of recession, let alone it being February in Chicago—not exactly the most conducive environment to foot traffic—and it’s hard to imagine a new art space hanging on, let alone thriving. Yet that’s what The Black Cloud Gallery of East Pilsen (1909 South Halsted, blackcloudgallery.net) has managed to do. Since opening in October, the fledgling gallery has gone from six contributing artists to nearly thirty, and says it is currently turning a profit every month.

“We represent artists, not just display them,” says gallery co-founder Clarke Canedy. “When we show an artist, we don’t just put work up and hope people come in on 2nd Fridays, we curate the work to strengthen it. We hang work at local businesses; the artists are being exhibited out of the gallery for more exposure. We rent our space for all sorts of private events; classes are taught here. We try to get as many people in front of the art as possible in different ways.”

Some of those different ways have included hosting charity events, a birthday party, baby shower, wedding reception, jewelry show, sewing classes, comedy shows, and drawing sessions with live models starting in March (and they’re looking into yoga). Their latest hook: an “Art Bazaar,” with more than ninety pieces from more than thirty different artists set at $200, all through February, kicking off with a gala event February 4 from 7pm-10:30pm.

“The aim is to make art a bit more ‘accessible’ to the people,” says Canedy (their pieces generally sell anywhere from $300-$2,000). “Also, we wanted to challenge the artists. A lot said they tried new things, methods they hadn’t used before: instead of canvas maybe a scrap of wood, or a skateboard deck; screen printers painted, a painter made sculpture—everything from clothing to painting to stained glass to sculpture to pottery.” (Jonas Simon)