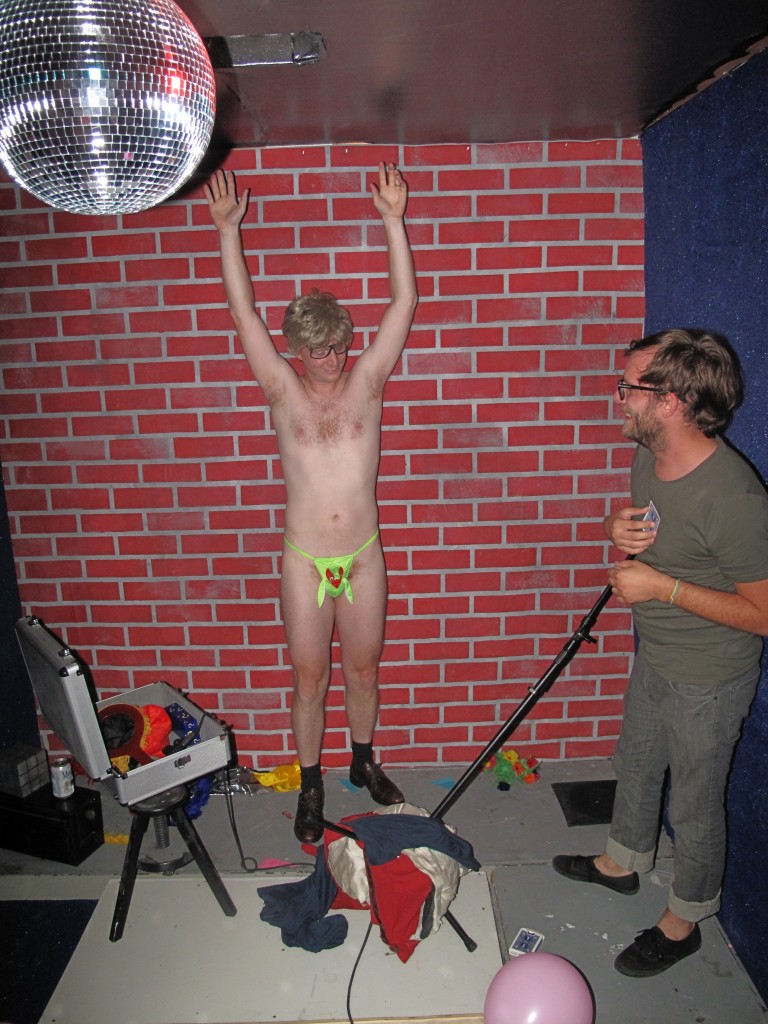 It has been far too long since I have seen Ross Moreno’s naked body. If you’re familiar with the artist’s disconcerting blend of “comedy, magic and a little something extra,” you naturally concur. Moreno’s high-concept vaudeville routine, which might begin with a few card tricks or masturbation jokes but always ends in partial nudity and tears, has provoked uncomfortable silence and nervous tittering from Munich to Hong Kong. And this Valentine’s Day, the Chicago-based performer will appear at Club Nutz, a comedy club located in Scott and Tyson Reeder’s kitchen pantry. With the holiday approaching, my prurient desire to watch Moreno burst from the moth-eaten, jock-itching, tear-away suit he’s been performing in for the past seven years seems more urgent than ever. After all, he is my husband, and that tear-away suit is my handiwork.

Indeed, marrying a man who’s built a career performing botched magic tricks that invariably leave him wandering across the stage in thong underwear pays dividends: rather than suffer through another champagne and oysters Valentine’s Day dinner just to get his pants on the floor, I’ll simply catch his show at Club Nutz with the rest of you.

Two blocks south of the Rainforest Café and two never-ending flights of rickety stairs above an adult bookstore, the space itself is already funnier than any of the acts you’d find advertised in “comedy” listings. “The world’s smallest comedy club” (according to its proprietors), Club Nutz opened in Milwaukee, migrated to London and Cologne as an art fair pop-up, and finally settled in River North last fall. 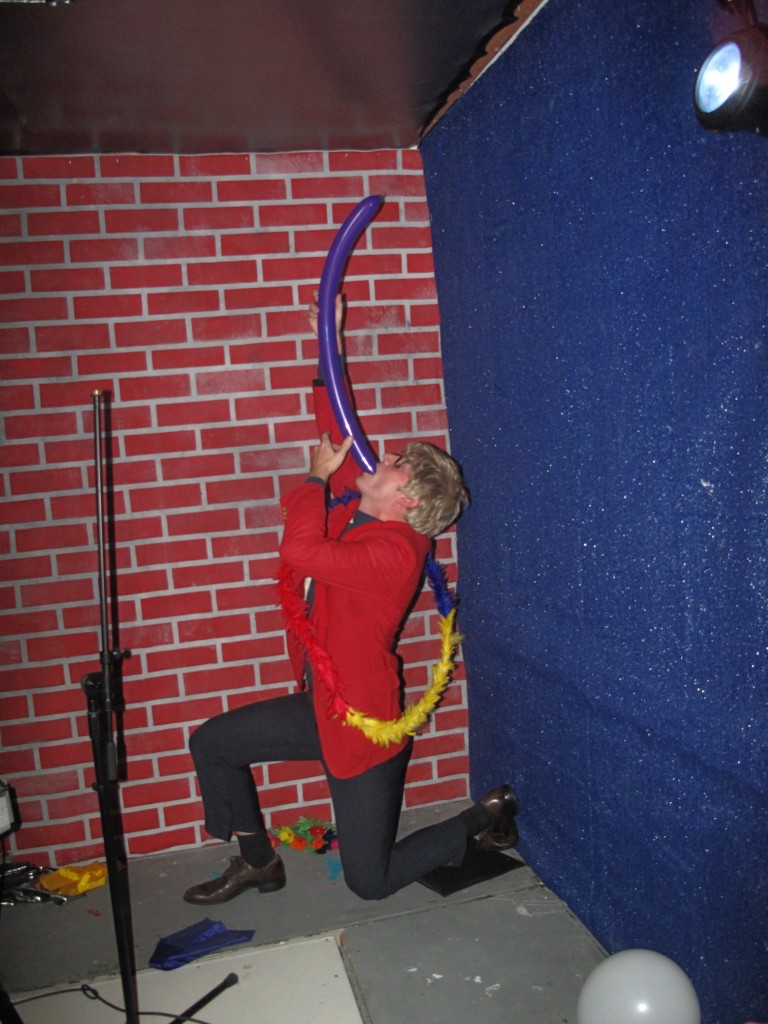 These jokes aren’t funny. Or at least they’re not meant to be funny (so I’m told); it’s the absurd fact that anyone would expect a laugh from them that we’re to find so amusing. Obviously, the characters and the material Moreno performs are born to fail: wearing a cheap wig and glasses’ frames—just the frames—he stutters and mumbles and does something or other with a bunch of hoops covered in colored feathers. And as he fumbles through card tricks and tells premature-ejaculation jokes whose punchlines are more sad than anything else (particularly for interested parties), Moreno’s washed-up magician embodies the onslaught of half-hearted ambivalence, disingenuous self-righteousness, and mindless soul-searching invoked by a Hallmark holiday. Like a cheapskate excused from throwing down for roses by claiming that Valentine’s Day is a heteronormative wealth-transfer mandate brokered by the military-industrial complex and those guys selling teddy bears on the corner at Western and Fullerton, Moreno might have it in his heart to make us smile—but it works out better to appease our appetite for cynicism. It’s this phlegmatic recourse to irony that leaves the possibility, however tenuous, for something real and more generous and makes Moreno’s work compelling. 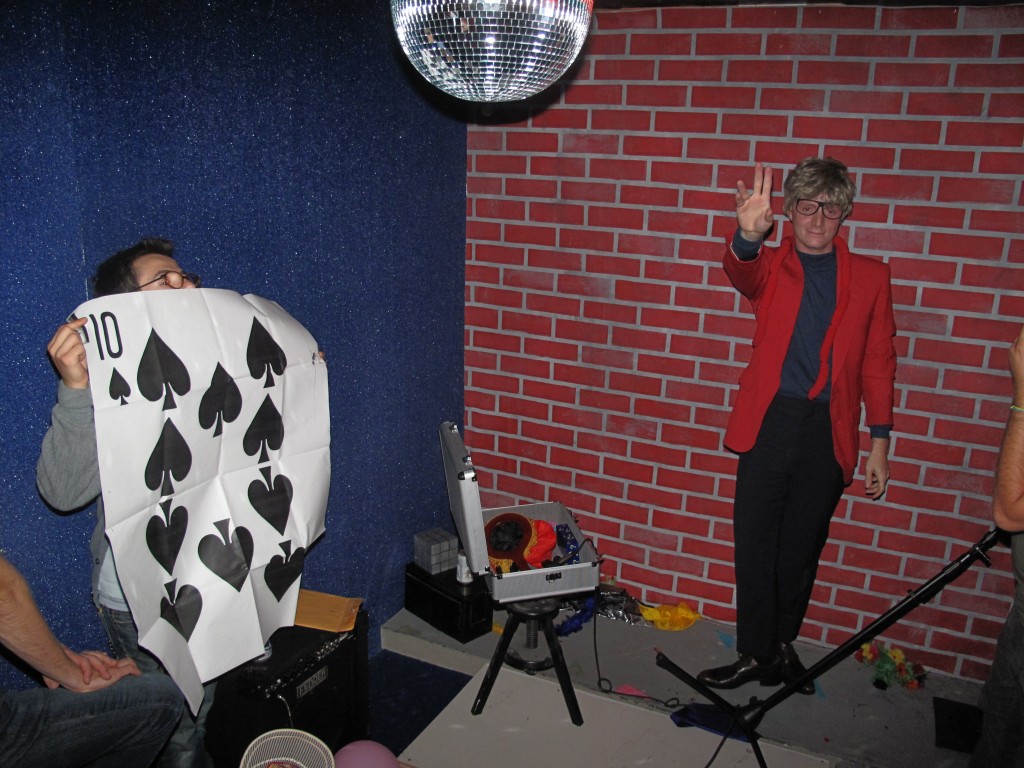 Moreno’s on-stage persona reads as some version of self-parody meant to boast a level of self-awareness and confidence that overshadows the public self-ridicule at its core. While a performer makes himself vulnerable by exposing his faults, he supposes himself to have evolved beyond the insecurities they should produce. As much as Moreno likes to believe that being conscious of one’s flaws erases them, or that exaggerating irritating behaviors transforms them into charming quirks, the persona Moreno performs fails to disentangle itself from his off-stage identity and, consequently, leaves his emotions as exposed as his backside.

I prefer to believe that the ambiguity fogging around Moreno’s persona is deliberate. (Of course he knows that those “my wiiiiiiiiiiife…” jokes are stupid! I mean, I don’t like to cuddle after sex! At the same time, he really makes an effort to get his card tricks right.) The balance has always been delicate, and anyone who saw Moreno’s contribution to the MCA’s Here/Not There series last summer witnessed one extraordinary example of this dynamic: For the millionth time, I’d drawn the four of clubs on Moreno’s back with a sharpie before he left for work. After riding his bike through record-setting heat and enduring a long day at the office, Moreno stood before a souring crowd, tore away his suit, and revealed not the four of clubs but his sweaty, blank, white back. For the audience, it was difficult to determine whether he botched the trick or was apologizing for his lack of talent by flashing some skin. Either way, it was more Ross than Ross, a sophisticated play of self-parody and failure, reverberating through a moment of profound discomfort. Afterwards, I wanted to cuddle.