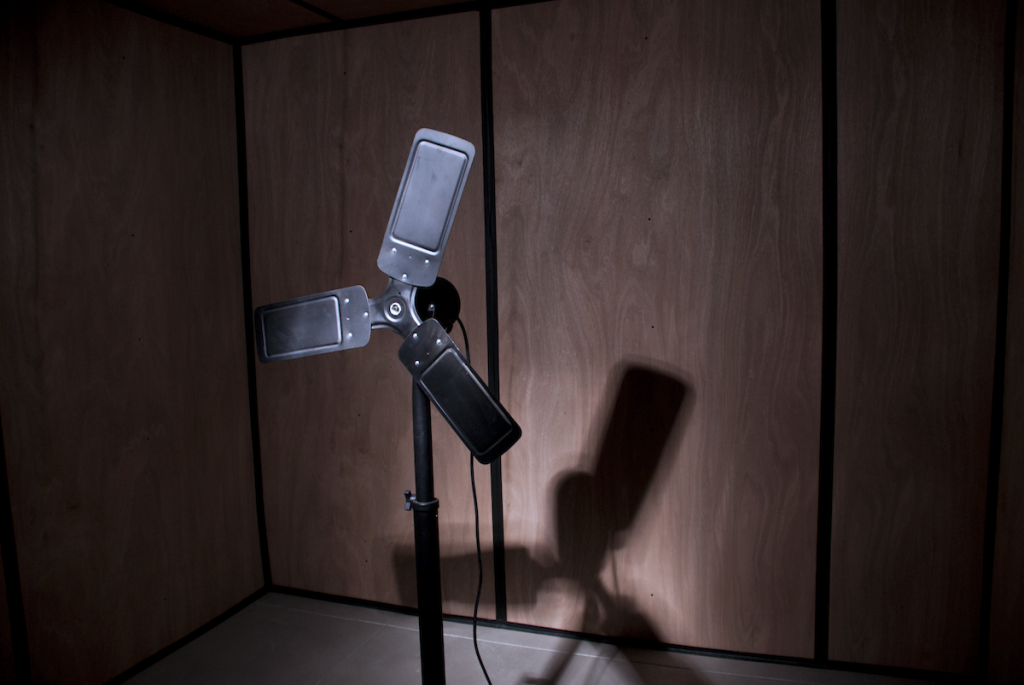 In the statement for his installation “Negative Matter,” Dayton Castleman claims inspiration from the industrial light and magic of James Turrell, Olafur Eliasson, Anish Kapoor and Disneyland. An enjoyable grouping, but the oddball in that list is not the Magic Kingdom, but Castleman himself. While I could easily imagine Turrell and his airport-rave ilk doing lighting design for the recent Disney remake of “Tron,” the imaginary movie “Negative Matter” calls to mind would perhaps be a David Lynch joint.

The viewer approaches a shed that emits a hum of activity and a soft movement of air. The wind gains in noise and intensity as one weaves in darkness around a couple of light-baffling walls and comes to face a dim spotlight on a giant standing fan. From the direction of the fan comes a steady blast of air, but its unplugged cord is visible on the floor, and its shining blades, free of any protective cage, are slowly shifting back and forth, as if being pushed by gentle, indecisive breezes. There is a black line on the ground and a boundary cable in front of the fan, and a sign at the entrance commanding viewers not to touch the art, but no posted explanation for the piece—so, spoiler alert: the secret is a lighting trick. The spotlight is a high-speed strobe that makes the blades on the high-speed fan (which is plugged in—the other cord is a dummy) appear to barely turn.

In fairness, it is a magic trick, which would seem to give credence to the Disney comparison. But my feelings were of neither amusement nor wonder. Standing in a strong wind in a dark, enclosed area with only the apparition of a fan, which would cease to be an apparition if I were to impulsively reach out and have some fraction of my body hacked off—my sincere response was dread, both numinous and visceral. And perhaps all the more so, since I walked in knowing exactly what the trick was. The ecstatic violence and contradictory codes reflected in Castleman’s seemingly simple gesture relate to a fundamental fracture in the world that is often best apprehended in shadows. (Bert Stabler)