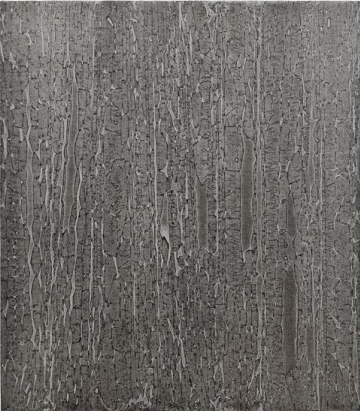 Philip Vanderhyden’s seven monochrome paintings in his solo exhibition, “Outside Group,” at Andrew Rafacz Gallery are primarily about materiality. Like silt in a stream, the paint in shades of gray washes down the canvas. Vanderhyden creates this effect by applying oil paint with rollers to burlap and creating textures in the wet surface by lying down and lifting up sheets of plastic wrap. Yet, matter is quickly transformed into matrix in these works. When viewed from a distance, the dense materiality of the paintings disappears and they seem as immaterial as the static on an old TV. This fluctuation between presence and absent is relative to changes in the viewer’s position within the gallery: as one steps closer, the materiality of the paint asserts itself and the “static” vanishes. In this shifting terrain, one can search for signs and patterns in the ebb and flow of the gray paint.

Vanderhyden’s non-objective paintings in “Outside Group” expose some of the specific qualities of painting as a medium: the inherent grid of the surface made plain by the weave of the burlap, and the ardent border of the frame all the more noticeable as it holds back the tide of paint. Ultimately, though, the burlap’s coarse texture and the way that it seems to interfere with the formation of any recognizable pattern or image on the surface reveals that these paintings are as close to objects as they are to images. The blistering surfaces of Vanderhyden’s paintings are akin to natural objects like snake skin, lichen and moss, even though these textures are made with synthetic materials, like plastic wrap. The skin-like surface of these paintings, seemingly encrusted with grit and grime, also inspires associations with the human body. Despite their emphasis on the visual, Vanderhyden’s paintings remind us that even as spectators our feet are ‘in the dirt,’ to paraphrase Georges Bataille. (Regan Golden-McNerney)