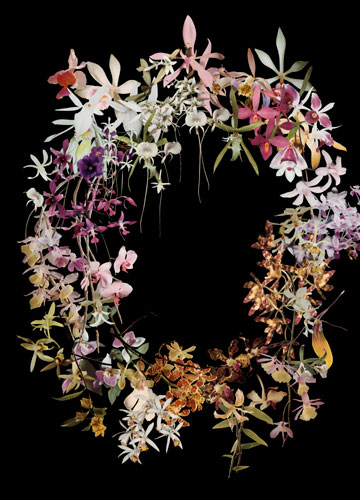 If you’re reading this, I probably don’t have to introduce Stephen Eichhorn. The much-buzzed-about collage artist has been everywhere these past few years, appearing in group shows, solo shows, printed matter, residencies, and “Best Of” lists across the board. In his latest solo show, “Flowers,” Eichhorn presents more of the same: botanical collages of images painstakingly extracted from books, magazines and vintage wallpaper to create gentle yet compelling Ikebana-esque arrangements. And while some of these images have been seen before, the vibrancy of these works is somehow amplified by the ability to see Eichhorn’s garden grow, incorporating richer images which, flawless in their construction, emerge specter-like from the vastness of their monochrome backgrounds. Eichhorn’s penchant for orchids is particularly fitting considering the flower’s parole of both virility and delicacy, of history and evolution. In “Yellow Orchid,” these botanical assemblages exude a sense of control and deliberation that demand the viewer’s attention—not because of their forcefulness, but rather for their balance, the thoughtful coupling of the natural world with the void of space. “Floral Burst 1” calls to mind supernovas, lush bursts simultaneously chaotic and structural, reaching to the far edges of the paper. Such effects are likely the truest testament to Eichhorn’s ability as an artist: the power to infuse an image with such vibrancy that not only does it live, but indeed, it thrives. (Jaime Calder)