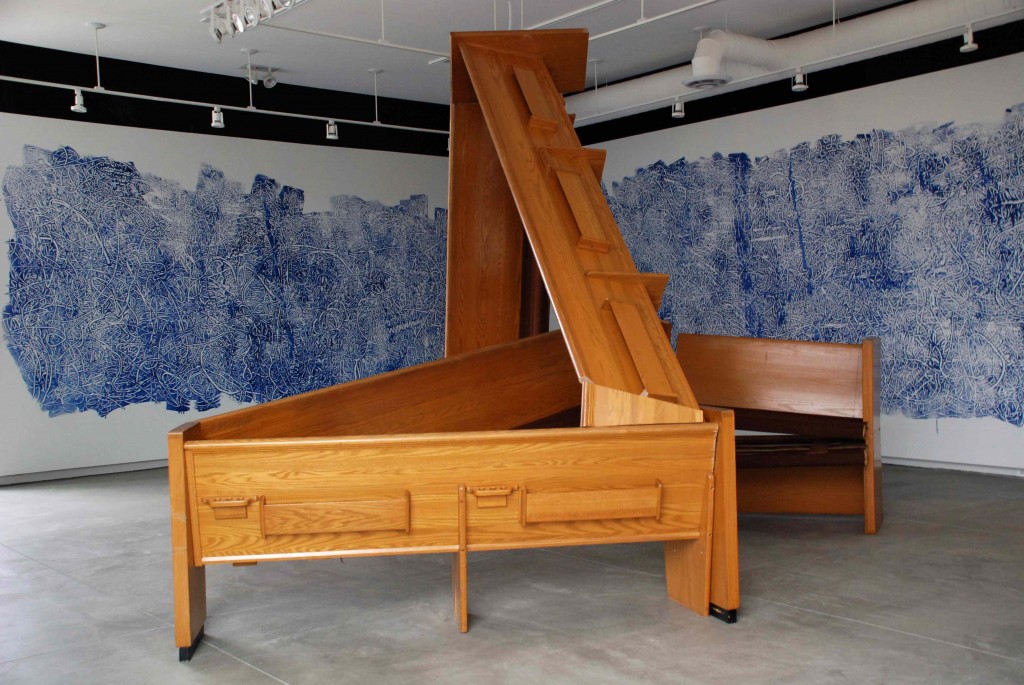 The advent of Abstract Expressionism in the 1940s meant a great deal to the art world. Generally, the movement of the body was now part of visual art, pictures didn’t need to have defined centers or edges, and, rather than being forced to represent, art materials could be allowed to speak for themselves. But in the U.S. in particular, AbEx meant modernity could look individualistic and eccentric rather than merely slick and mechanical; the movement espoused freedom so alluringly that the CIA supposedly organized traveling exhibitions as a means of winning hearts and minds during the Cold War.

Performance artist (and non-Christian) Chelsea Culp has provided a new iteration for the cultural odd couple of Christian Expressionism (X-Ex?). In her installation at Trinity Christian College, six long church pews have been sawed and bolted together in a towering assemblage whose bulk recalls the welded piles of I-beams created by “plop art” public sculptor Mark di Suvero—although the form follows the smooth line of a Henry Moore work, and, as with Moore’s reclining blobs, the shape affords 360 degrees of striking viewpoints.

The four walls have been adorned with massive, intricate blue finger-paintings, carefully transferred from stretched plastic sheeting in an ingenious monoprint process, to produce swirling, ethereal, immersive images that evoke no one more than Jackson Pollock, the high priest who announced, “I am nature.” Rather than rendering any critical judgment on the legacy of American Christian modernism, whether in the megachurch or the blockbuster exhibition temple, Culp has created a space for moving within or contemplating in stillness (even while sitting on the pew piece), a blurring of edges that suggests openness and reconciliation. (Bert Stabler)

[…] working on this piece at Seerveld Gallery with about four students, a very passionate conversation emerged around the source of original […]