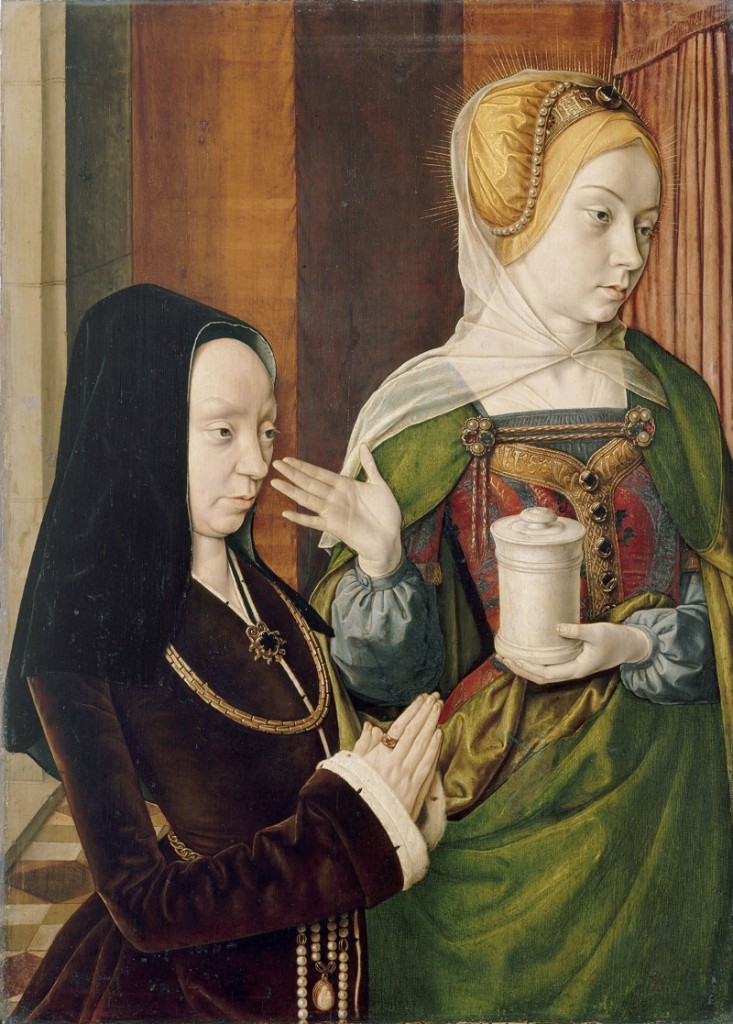 As its title denotes, this is an exhibition of things made to flatter and delight a French royal court, and since so many of the artists are Flemish or Italian, it is French patronage rather than national origin that distinguishes this collection.

When shown in the Grand Palais, in Paris, earlier this year, it was called “France 1500 entre Moyen Age et Renaissance” to focus on the major historic transition underway in that century. By the year 1500, the secular ideals of the Roman Republic had already been reborn in Italy, bankers were becoming more important than landowners, France was uniting into a nation state and Martin Luther was a teenager. Although Humanism and Italian mannerism would soon define French taste, the court of Charles VIII still savored that sweet medieval dream of a divine order with the Madonna’s family at the top, the extended royal family one notch down, and beautiful angels floating freely in between. 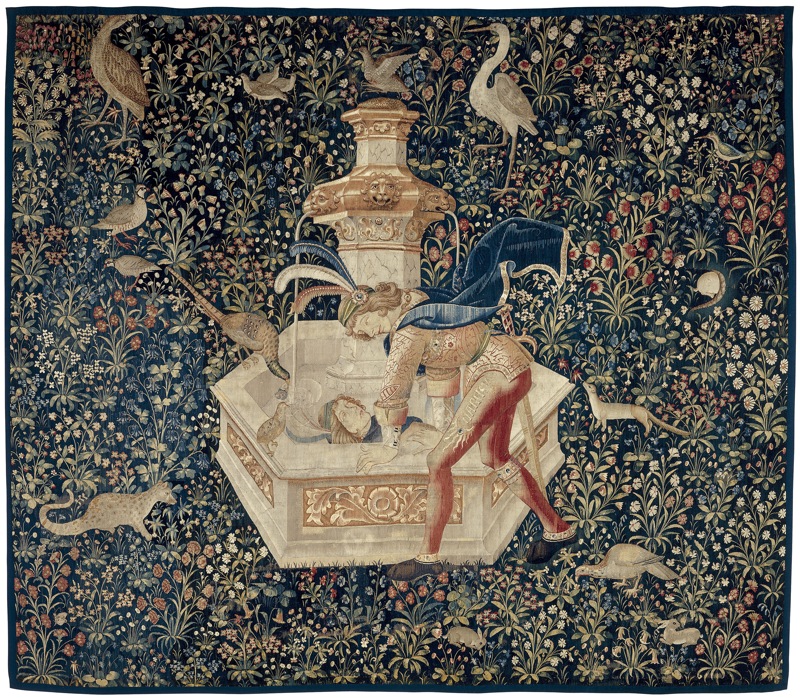 Most spectacular are the tapestries. Unfortunately, the two great unicorn cycles of that era did not leave New York or Paris for this exhibition, but the flaming red legs of the Narcissus from Boston are just as charming, while the power and glory of the “Three Stags” and a scene from the Trojan War contrast with the later, more decorative pieces shown in the tapestry exhibition at the museum two years ago. The Middle Ages seem most enchanting just as they were coming to a close.

The six life-size stone statues are great as well, though clearly a little closer to earth and further from heaven than figures done three centuries earlier. Individual personalities emerge from the faces of each statue of the Virgin, and struggle to emerge from the crowd scenes in tapestries, paintings and stained glass.

Portrait paintings, like the miniature by a follower of Nicolas Froment, did not yet express an individualized personality the way Germans, like Dürer, or Italians, like Carpaccio, were doing at that time. (Since it was finished in France, Leonardo’s half-smiling “Mona Lisa” would have been perfect for this exhibition; alas, we got a somewhat lesser Leonardo—but a Leonardo nonetheless—instead.)

A few printed books are included to remind us that Gutenberg’s revolution was in full swing, while the hand-painted book was dying out with a flourish, as demonstrated by Jean Fouquet and his successors, all with the amazing ability to create a rich, entertaining world within such eye-straining dimensions. Some of them, like Colombe’s “Hours of Anne of France,” seem designed for spiritual education, but other scenes, like Bourdichon’s “David and Bathsheba,” offer the same kind of sophisticated enjoyment that Persian princes of that time might have expected from a Shahnameh. 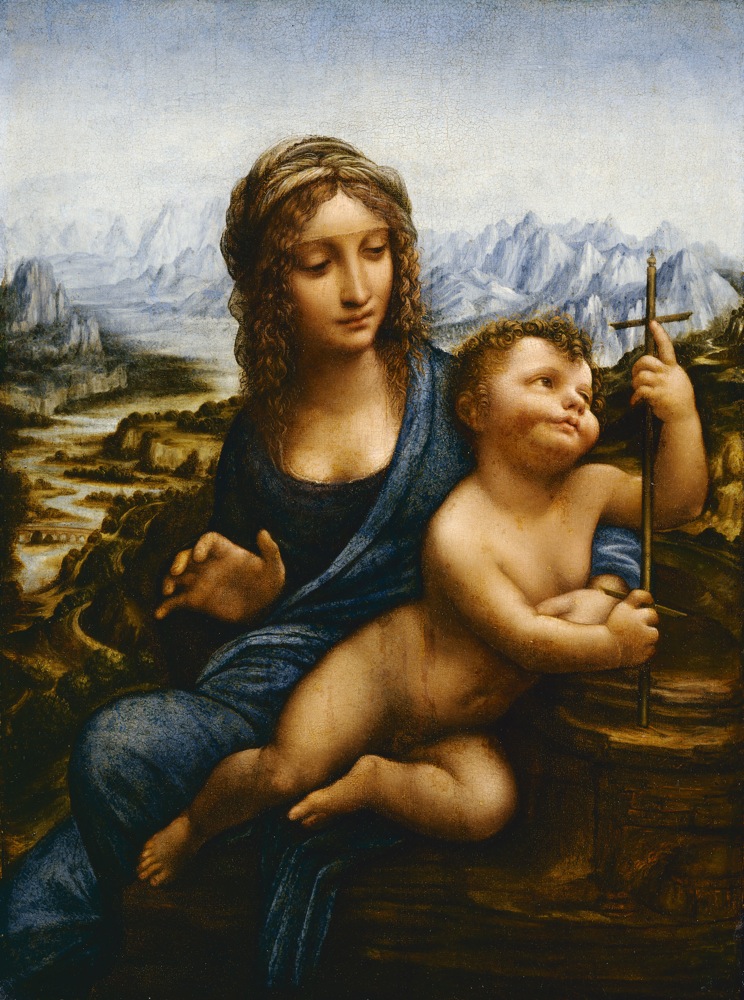 Leonardo da Vinci, with assistance. "The Madonna of the Yarnwinder (The Lansdowne Madonna)," 1501/07. Oil on panel, later transferred to canvas, then mounted on panel. Private collection.

There is great historical interest in the reliquary for the heart of Anne of Brittany, the wealthiest lady of her time and the wife of both Charles VIII and Louis XII (with the contents of the golden vessel dumped during the French Revolution), but the real heart of the exhibition are the ten paintings by Jean Hey (1475-1505), which is probably the largest exhibition this Netherlandish artist will ever have. Not all of these works are at the same transcendent level as the “Annunciation” from the Art Institute’s own collection, but his portrait of Francis de Chateaubriand from the Glasgow Museum could be a special exhibition all by itself, as it seems to trumpet both French national spirit and Flemish piety in the same brisk, sunny outdoor setting that Monet would celebrate four centuries later.

This is the kind of blockbuster exhibition that’s been rather scarce lately. Objects were borrowed from almost fifty institutions and private lenders, and many, like Pierre Sala’s “Little Book of Love,” are famous enough to be all over the internet. A better survey of this time and place is likely not possible.

As a footnote, I also wonder if a collection of objects as beautiful and profound could possibly be gathered from the visual arts of our much richer, better educated, and more populous eras. Paris was the largest city in Europe at that time, yet still it had fewer people than now live in Rockford, Illinois. (Chris Miller)

Through May 30 at the Art Institute of Chicago, 111 South Michigan.