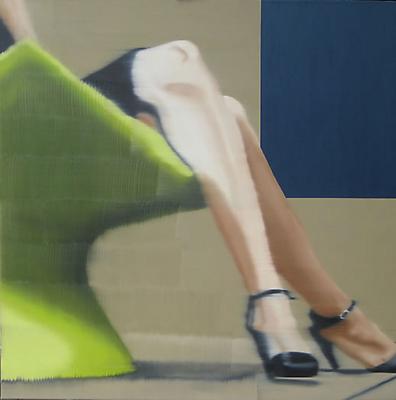 It’s hard not to smile at each of Douglas C. Bloom’s visions of our modern world. Starting with the kind of rough, blurry, monochrome photo images that Luc Tuymans finds in old newspapers, Bloom manipulates them into clever little stories. Where Tuymans wants us to dread our sordid, ruthless era, Bloom interrupts or entwines those images with flat, often rectangular solid-color passages, making something like a comic-strip joke about the modern corporate landscape of shallow people and places, as if all modern life took place in a Holiday Inn.

Bloom is adept at both the selection and manipulation of images, and they look good big up on walls instead of just on the small computer screens where presumably they were designed. But they fit a bit too easily into the superficial corporate world that they’re spoofing, and seem best suited to cover the walls of a trade show display booth in the hospitality industry.

Bloom explains that “while destroying the painterly pictorial surface, a new photographic image is created” while engaging in “the destruction of traditional painting in favor of something new.” Haven’t we already had a hundred years of photo images manipulated by journalism, advertising and photo-based painting? How much more destruction is still needed? (Chris Miller)