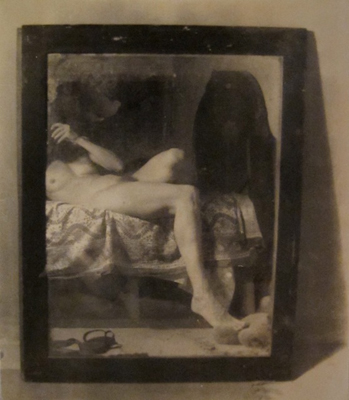 The boldest genre of late-twentieth century postmodern photography, the feminist self-portrait survives in the ceaseless experiments of Rosemary Warner, who began her voyage of self-discovery in the 1990s and has not yet stilled the agonies of existence. An inveterate postmodernist, Warner does everything from scratch negatives, pile multiple images into her compositions, segment her works, tone the aesthetic surface, deploy multiple exposures, and mix up her subjects—and that is only the beginning. She sometimes even hires models, which does not make her images any less self-portraits in an existential-psychological sense. And there is no technical method to her madness; everything is done for insight. Warner is on a tear to show all the dimensions of confinement, from oppressive bondage to reposeful quietude. Her most revealing image has her naked and encased in an empty tub, her head pressed against its side, at the limit of self-abjection. Warner makes one nostalgic for feminist truth. (Michael Weinstein)

Through May 1 at Alibi Fine Art, 1966 West Montrose

Rosemary’s photography is a beautiful blend of stark reality and sublime romanticism. As one who is familiar with her entire body of work, I can easily say that anyone–man or woman–can find some aspect of him/herself in this artist’s compelling and thought-provoking images.

Great review! I’ve followed Rosemary’s work for many years and she never, in my experience, disappoints. I own many of her photographs and they never get old. They are full of serious observation, a lot of solidity! Deborah Masters

I loved this exhibition. Rosemary Warner does work that is modern and yet it has a way of dissolving into the past. She does something with time that I can’t put words to – a real feat. I thought I knew how she made her photographs, but the more I looked at them the less sure I was… The way she uses light is painterly, and as a painter I rarely say that about photography. The images are layered and some stayed with me long after I left the gallery.