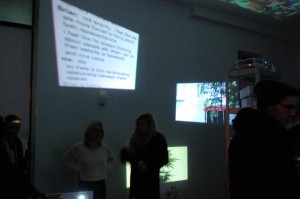 If you walked into the Kunsthalle New gallery in Pilsen at around 8pm last Saturday, the first thing you would have noticed was a group of people standing and staring at the ceiling. Above them, what looked like a pile of rags jumped and rustled, like a cat wandering under a pile of clothes. It was artist Chris Collins’ contribution to the thirty-some projections at Chicago’s BYOB (Bring Your Own Beamer), a one-night exhibition by Chicago-based internet artists.

BYOB is the brainchild of Rafaël Rozendaal, a Berlin artist who started the event as a way to bring net artists together in a seamlessly adaptable exhibition. Because the only stipulations are that artists must attend and they must bring their own projectors (they’re known as beamers in Europe), BYOBs were meant to be exported far and wide. Since its first incarnation in Berlin in July 2010, there have been more than ten BYOBs in cities across the globe. Nicholas O’Brien and Brian Khek, both SAIC-affiliated artists who do internet and computer-based art, organized the Chicago version. “It’s really about coming together and saying, yes, this is kind of one community, even if it’s not in one geographical location,” O’Brien says. “Also, being able to share with others in the physical space and not having to be limited by the typical channels of communication on the internet. Like, you don’t have to have a certain number of ‘likes’ to engage with the space, which can really dictate the online traffic of certain projects.”

For a while on Saturday, it looked like BYOB was in jeopardy. Its original space, Bridgeport’s Archer Ballroom, bailed at the last minute. Luckily, Bea Fremderman, who participated in the show and runs Kunsthalle, stepped in. Still, once everyone showed up and the projectors were humming, power was a constant struggle. Every fifteen minutes or so, the small space would go dark. Circuits were overloaded by all the projectors. That was something O’Brien and Khek had worried about, and O’Brien spent a good half hour dashing from one computer to another, plugging and unplugging, unrolling extension cords. Finally, he decided that the artists had to show their work in twenty-minute shifts. That did the trick. 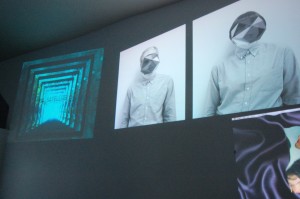 Daniel Baird, a sculptor at UIC, seemed lost in thought, standing to one side as others mingled and drank beer in the shifting light of the projectors. His piece was projected on the ceiling above the gallery door, a green square with what looked like a transparent box in the center. “I used modeling software to create a glass model of NASA’s Vehicle Assembly Building in Cape Canaveral,” he explains. But why is it surrounded by a green, uninhabited landscape? “It’s like a future ruin. It’s like what would happen if people discovered it in a thousand years. I’m interested in space travel, and also the idea of a future ruin—I mean, a cassette player, for example, isn’t a ruin like the Parthenon, but it sort of is, because we’re so far ahead of it.”

Collins was at his laptop, demonstrating how to toss the bundle of rags on the ceiling by running his cursor over the image on his screen. He had created this piece by stitching together images from all the other projections using a game engine and giving them the physical properties of cloth—a sort of cheeky nod to communal quilt. “It’s kind of a way to physically embody the event,” he says, adding, “Most of these people here I only know on Facebook, so it’s weird to finally meet them.” (Benjamin Rossi)