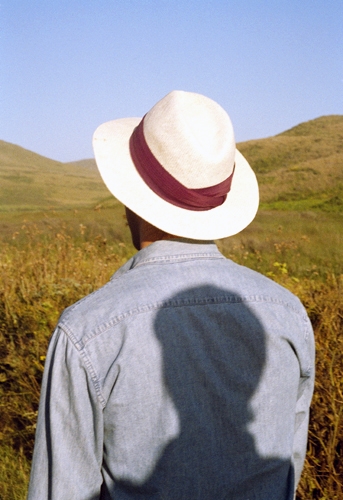 “Beauty Ritual” is a group show of photographs by Billy Buck, Hani Eid, Mac Katter and Olivia Swider, whose work gives an unspoken shape to the titular concept: the ritual capture, construction and dismantling of “beauty.”

Swider’s work suggests a rite of preparation, after which she hunts and traps existing beauty with the lens. The elegant composition of “The Clicking of Bones” transforms manicured lawns into a geometric suburban jungle where a prowling housecat is stalked by the photographer.

In “Cheap and Easy,” Buck performs his ritual at the helm of a computer. He repurposes a Photoshop filter normally used to perfect an unruly image into a tool that warps and foreshortens a mundane image of a stack of sponges into a funhouse deconstruction of focus and aperture.

The two untitled works by Hani Eid answer Buck’s method with sly acts of sleight-of-lens. Eid suggests manipulation where there is none, toying with his own authorship; what appears to be a dusty print of a gaudy sunset is in fact an extreme enlargement of a license plate smattered with the carapaces of highway insects.

Katter also works toward a syncretism between the constructed image and the spontaneous, with an eye towards playfully engaging the viewer. His “Double Back” captures one hiker’s shadow cast over another’s body—but forces the viewer into the photographer’s perspective as the third, obscure traveler.

Whatever academic beard-stroking does go on at “Beauty Ritual” is tempered by a mischief that pervades not only the work, but also its curation. When the viewer steps in front of Katter’s “Double Back,” it almost seems as if it’s his own shadow that’s being thrown—by Eid’s sunset, which is located only feet away on the opposite wall.

Far from laboring under its concept, “Beauty Ritual” gives insight into the processes of four promising photographers, but never at the cost of the works’ inherent aesthetics, and never without a wry smile. (Tim Nordberg)