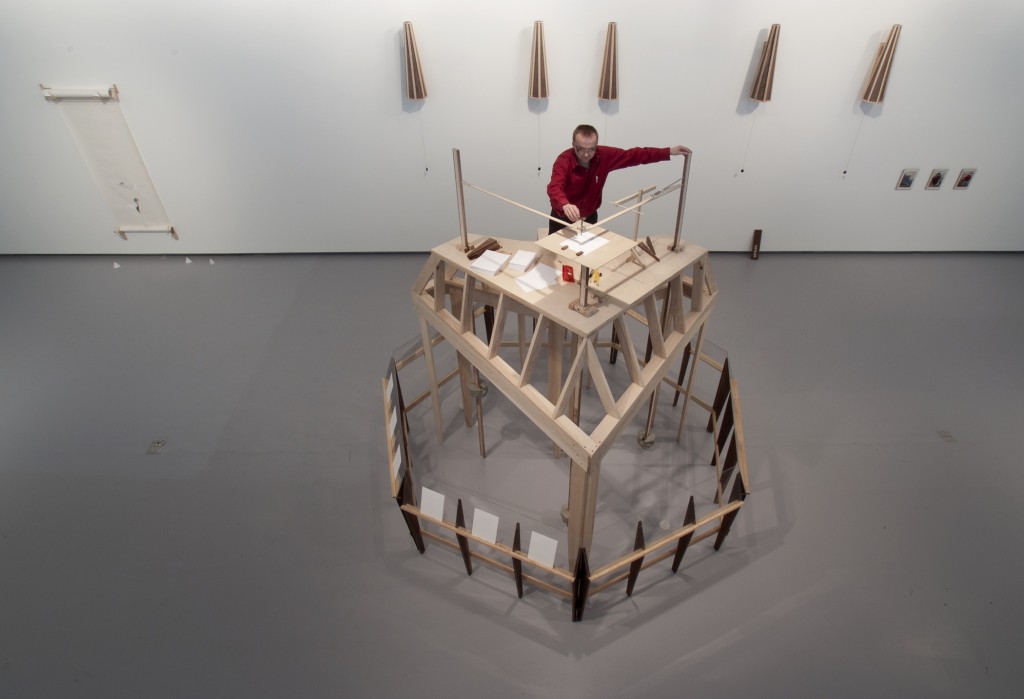 In the mid-nineteenth century, Scottish mathematician Hugh Blackburn invented the harmonograph, a device that draws elegant abstractions through the movements of two or more pendulums. Blackburn observed that the visual “harmonies” resulting from intervals of ratio in pendulum height correlated to similar steps in the musical scale. University of Chicago musicologist Larry Zbikowski is exploring the visual patterns of movement made by dancers of the waltz, and correlating these patterns both to the musical scores that accompanied the dancing and to states of emotion and consciousness in the brain. These synchronistic models serve as inspiration for Conrad Freiburg, whose virtual universe, erected in the main gallery at the Hyde Park Art Center, is divided into sections matching the seven notes of the Western major scale with sconce-like chimes affixed to the wall. While Freiburg doesn’t claim adherence to any esoteric system, the number seven recurs throughout occult cosmology; in theosophy, for example, the seven-step “septenary” describes the various “energy envelopes” of the soul that exist in subatomic emptiness.

But the actual experience of the exhibition is not unlike visiting a mysterious and cavernous antique science museum, minus all the boring information; after all, Freiburg, told me, “part of it is that you don’t get it.” He created a telescope and placed it on the high gallery catwalk to view harmonograph drawings hung by the gallery ceiling and arranged by tone. Drawings, graphs and stacks of transcribed research notes carefully carved out to create sculptural craters exemplify Freiburg’s interest in the “null hypothesis” and the “empty set.” Plaster prime-number polyhedron forms hold up a massive scroll containing Freiburg’s planning sketches, and smeared paint obscures found lithographs of mountain scenes. On Sundays Freiburg operates the Self-Contained Unit of Entropy (SCUE) machine, which uses cameras and a forced-perspective set to document the destruction of small items created from scrap by gallery visitors, and creates drawings with the massive lumber harmonograph he designed to anchor his cosmos. There will be a music performance in honor of the void on Friday, April 29 and on May 7 will be a discussion of harmony with Freiburg, Zbikowski and physicist Heinrich Jaeger. (Bert Stabler)

Through June 26 at the Hyde Park Art Center, 5020 South Cornell.