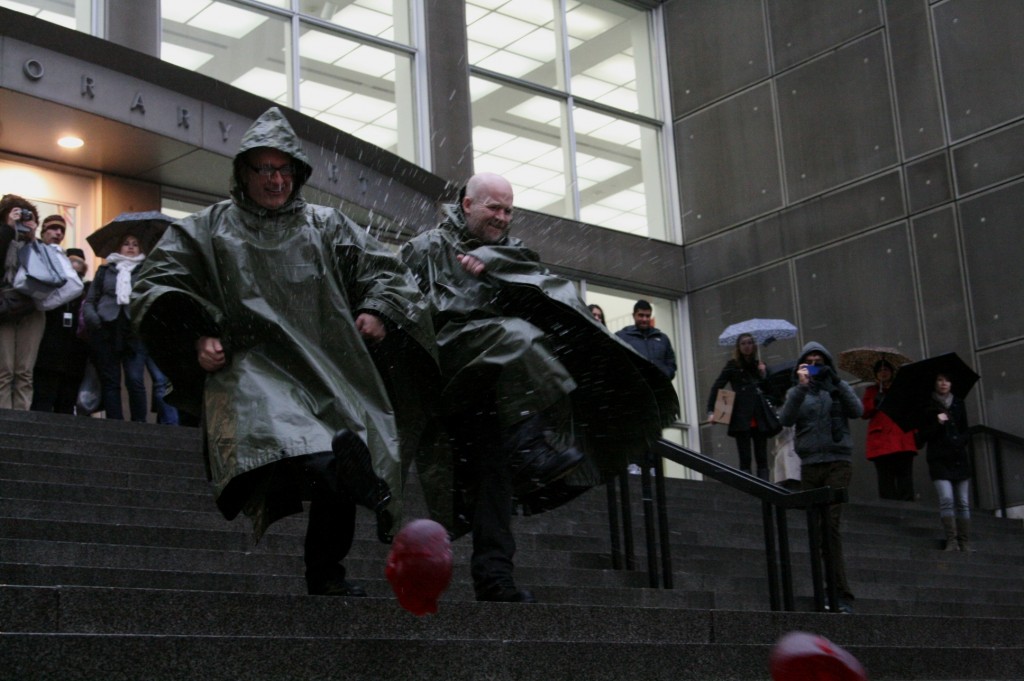 Heads rolled when the Museum of Contemporary Art closed their running series “Mash Flob: Turning Flash Mob Inside Out” on April 19 with a slightly dangerous game spearheaded by Industry of the Ordinary, the Chicago-based performance art group of Mathew Wilson and Adam Brooks.

Based on the origins of soccer or, to the British-born artists, football, the game involved kicking around rubber molds of the artists’ heads.

“Back in Mayan times, supposedly after battles, tribes would take the heads of their slain victims and use them as rudimentary balls,” said Brooks. “So we decided what we would do is have a game with both of our heads.”

The artists said they have a long history with creating art that deals with soccer and were fascinated by its violent origins. “It has this rather disturbing, possibly apocryphal history of kicking heads around,” Wilson said.

Despite the wind and persistent mist that left the tiled sidewalk and steps outside the museum slick and wet, around twenty people volunteered to play “football.” Another twenty-five or so gathered on the museum’s steps to watch the scuffle from above, where Brooks and Wilson, decked out in army-green parkas emblazoned with “Industry of the Ordinary,” presided over the melee.

To begin each point, Wilson and Brooks, brandishing their bullhorns, set up their two head-shaped footballs in the middle of the MCA’s substantially high stairs and kicked them down to the waiting crowd of players. The bouncy rubber heads, awkwardly shaped and nearly ten pounds each, bounced erratically, occasionally nearly hitting spectators. The two teams then grappled for the ball, both by kicking it toward their respective goals and occasionally just picking it up and running.

They asked the audience to cheer on their chosen team with a traditional English football chant to the tune of a Village People song, one with very few words: “You’re shit and you know you are.” Few spectators were bold enough to keep the song going.

Mash Flob’s purpose, organizer Amy Corle said, is to take back the idea of a flash mob, which has been co-opted by advertisers, and return it to its artistic roots. “Having artists come up with an idea and having the audience help them create the work of art, that idea has been part of performance art from the very beginning.”

And the museum is always on the hunt for ways to help visitors interact and engage with their artwork. “By having the artist lead the event it gives people a chance to interact with living artists, which is something we focus on.”

So for Corle, soliciting a piece from Industry of the Ordinary seemed like a no-brainer. “Their work is always that style. You had to be there to see it, you have to be part of it to see it and then that goes away,” she said. 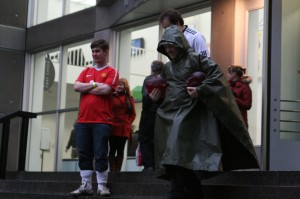 Some visitors didn’t fully realize what they were getting into when they walked into the MCA café. “I didn’t think we’d be playing,” said Jesus Mejia, a 27-year-old Chicago artist and Wilson’s former student. But he saw parallels between the performance and the current exhibits at the museum. “A lot of it goes along with this show [currently at the MCA], ‘Without You I’m Nothing.’ It has the same art and its audience’s concern.”

Though he managed to score a goal for his team, he said moving the ball was harder than it seemed. “They were a lot heavier than they looked. You couldn’t really kick them. I just kind of swept them along with my feet.”

Out in the cold, the game only lasted for about fifteen minutes. “It was over a bit quicker than I expected,” Wilson said, but after a few falls from the players, it seemed like the game had gone on for long enough. But Industry of the Ordinary could be hosting more football games in the future.

“We were completely surprised that [the heads] weren’t destroyed in the process,” he said. “They remain completely unaffected, so we intend to do this again.” (Shaunacy Ferro)