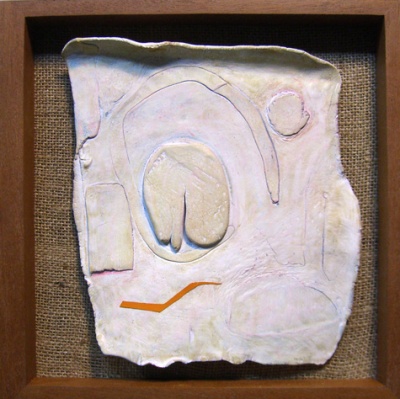 Ryan Fenchel’s objects breed curiosity. Although he often cites secret rites and mystical creeds as inspiration, with the work taking on the form of pyramids and ritual objects, the works do not fling open the doors of revelation. Fenchel likes the look of secrecy, and how one secret yields one more. He creates symbols hand-carved from marble, clay masks that scream through time, and culturally vague vessels like artifacts from Plato’s junk drawer. In addition to the texturally fascinating details of Fenchel’s discrete objects, it is important that they be viewed together, in arrangements, as contrasts and comparisons, as a collection meticulously tended by the artist. What results is a curio shelf, an altar, a special clutter of arcane paraphernalia where everything adds up to an essence as taut as smoke. This is slippery territory, but Fenchel wisely does not burden his objects with rigid meanings. Instead, the objects, happy in their freedom, welcome healthy speculation. 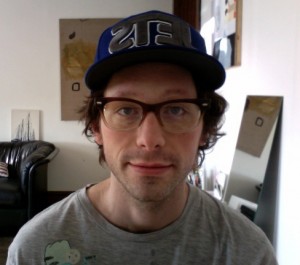 Fenchel says he makes things with “the imagination in my hands.” Where sometimes his clay objects are primitive and provisional, his frames and other wood structures are exact and simple. He cites an interest in the confluence of mid-century European modernism and traditional Japanese design, both being methods of construction that streamline style but demand careful and observant interaction. Layered on top or within the smooth geometric wood forms is the assembly of objects, from the functional to the freeform, and in various materials, that inspire curious looking. In a famous anecdote, the great writer Anton Chekhov declared that anything could inspire a story, and grabbed a nearby ashtray as example. Fenchel is also aware of the myriad prompts for creative transformation in the world around him. A glass ashtray sits on the edge of one of his sculptures. It begs for embers; it refracts the light. 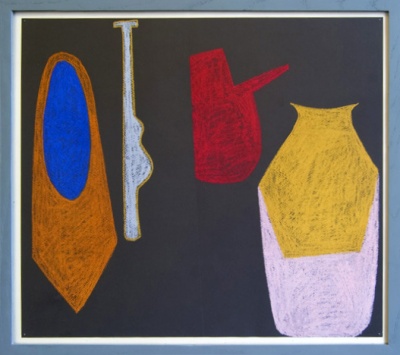