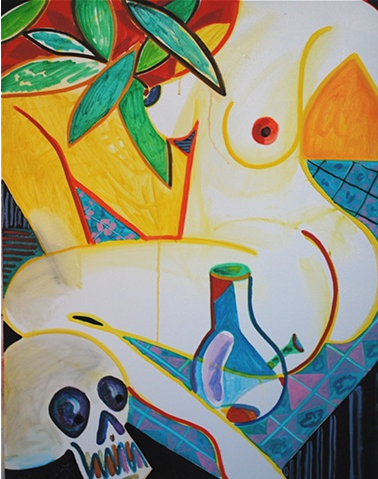 “Bodacious” is how Austin Eddy describes the women in his current series of paintings. They are naked, and their curves exaggerated, but not for the purpose of sexual display. Rather, the large bodies are a way for Eddy to explore how forms invigorate a space. “Skinny people don’t fill a canvas,” he jokes. One woman is pregnant, to give her more mass. The poses are sometimes uncomfortable, as if limbs and torsos were split through a prism, and they are always strikingly expressive. Eddy is going through a Picasso-Matisse period, drawing with paint and filling vaguely mythological scenes with color.

In the past couple of years Eddy’s paintings of chairs and interiors could be seen all around Chicago. The uninhabited scenes were animated by vibrant wallpaper and textile patterns as if channeling Hockney and Matisse. Eddy recently switched to oil paint, and also changed his subject matter to naked figures, mostly outdoors. The bodies sometimes meld into the surrounding leaves and landscapes, or else they emerge brazenly. Eddy considers the figures, their settings and the mythological narratives as entry points into explorations of color, line and form. 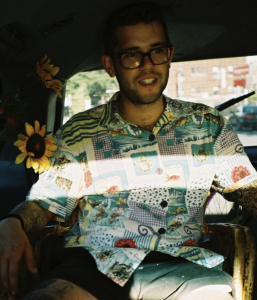 Myths, like musical standards, are places where an artist can inject his own interpretations. Eddy pointed to a bearded man with an erection in a forest, identifying him as Adam or Buddha—“the same, really.” In his studio it was propped on a thick book with the word Aesthetics large on its spine—the theory of looking good. 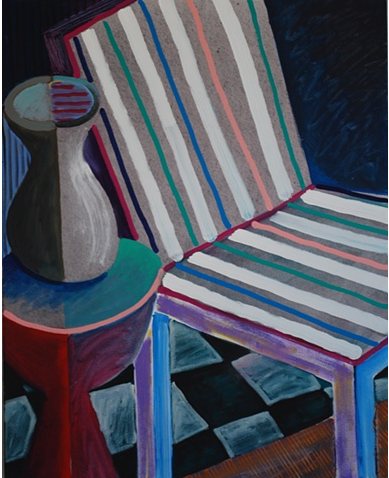