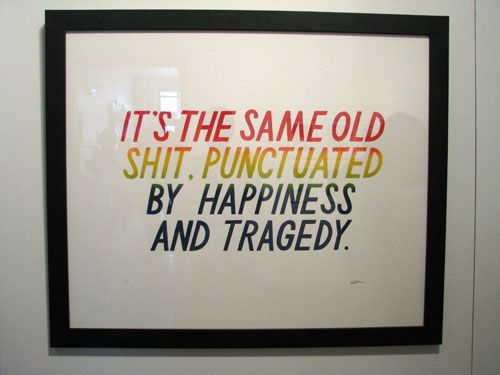 “It’s the same old shit punctuated by happ­iness and tragedy,” read Ryan Duggan’s screenprint for Johalla Projects, a statement that aptly encapsulated 2011’s Artropolis. That happiness is the piece causing you to gape in wonder, the rare work you can’t tear your eyes from, while the tragedy is everything else on display, reiterating the fact that you can show art wherever you want if you’ve got the money.

What’s been true of Artropolis in the past still stands: NEXT continues to excite more than Art Chicago; people-watching is worth the price of admission; and the entire fair is becoming smaller, evidenced by joint tenancy on the twelfth floor of both NEXT and Art Chicago, which only sharpens your focus to the difference between the two. The energy of NEXT is undeniable, where art spreads itself across more forms; it rolls, spins records, hacks itself to pieces, stretches across rooms, flashes and sings at you, and even makes you want to take a bite out of it. Art Chicago, on the other hand, exists mostly in squares and rectangles on white walls.

Not that Art Chicago is bereft of enjoyment, though if you pulled the Ed Paschke’s down the overall temperature would’ve grown tepid. All of the Shepard Fairey’s sold, which makes Santa Monica’s Robert Berman Gallery the big winner, but Hammer Gallery stood up for Chicago by releasing a $75,000 Roger Brown painting into the world, along with a lovely Karl Wirsum. Carl Hammer himself said that the weekend was moving slower than in past years, but that he was pleased with how his space came together. If I had Chris Ware and Henry Darger on my walls, I’d be pleased too.

In all honesty, there was some great work to see. Colin Chillag of Christopher West Presents had these gorgeous half-complete portraits; each was also its own palette, clusters of unused paint huddled together in the corners while the image fell away in places to reveal the sketch beneath. A sense of humanity—even dignity—emerged from Chillag’s canvases via the intentional lack of finality, as if each person was still evolving. 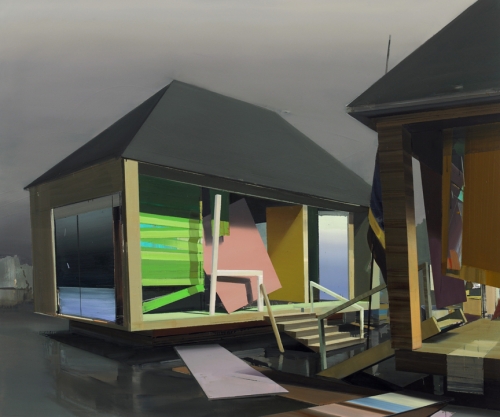 Ulf Puder’s “Schwestern” at Kavi Gupta entranced with flat planes of color describing desolate homes which were somehow still inviting, an absolute balm to eyes that had been wandering Artropolis for hours. Rosa Martinez-Artero of La Ribera Galeria de Arte from Murcia, Spain, had dozens of small soft-focus paintings of people on hazy backgrounds of color, some of the most subtle, elegant pieces to be found. Swoon’s screen print on Mylar entitled “Miss Rockaway Armada” at Christina Ray, New York, might have been mythical graffiti left by mermaids. Evol of Wilde Gallery, Berlin, sold a $15,000 painting on cardboard, and I’d say it was well priced, whereas Encore Glass and Fine Art sold a William Morris blown-glass vase for $44,000, and I’m fairly certain I saw something comparable on Michigan Avenue for $175. 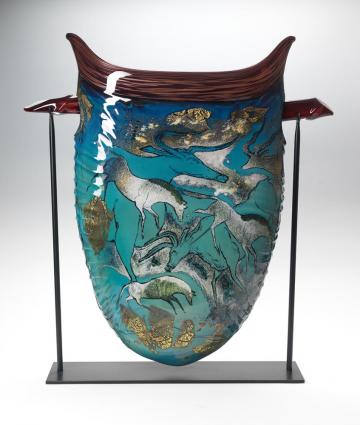 Everything that Woolff Gallery of London had to show was worth seeing, especially Zac Freeman’s found-object portrait “Mike.” Freeman pulled more expressive attitude out of nuts, bolts, buttons, and odd scraps of wire and wood than many painters can caress from years of study and countless tubes of oil. Jill George Gallery, also of London, put on a fantastic show, which had nothing to do with the Damien Hirst in the corner. Tomas Watson, Alexander Mihaylovich, Christina Niederberger, all brilliant. Michal Macku of Paci Arte Contemporary in Brescia, Italy, was also unbelievable. I’m still not entirely sure what I was looking at, but he’s a photographer who somehow slices his subjects into translucent cross-sections layered together in thick glass cubes. Were these pieces less heavy, I would’ve tried to stick one in my jacket. 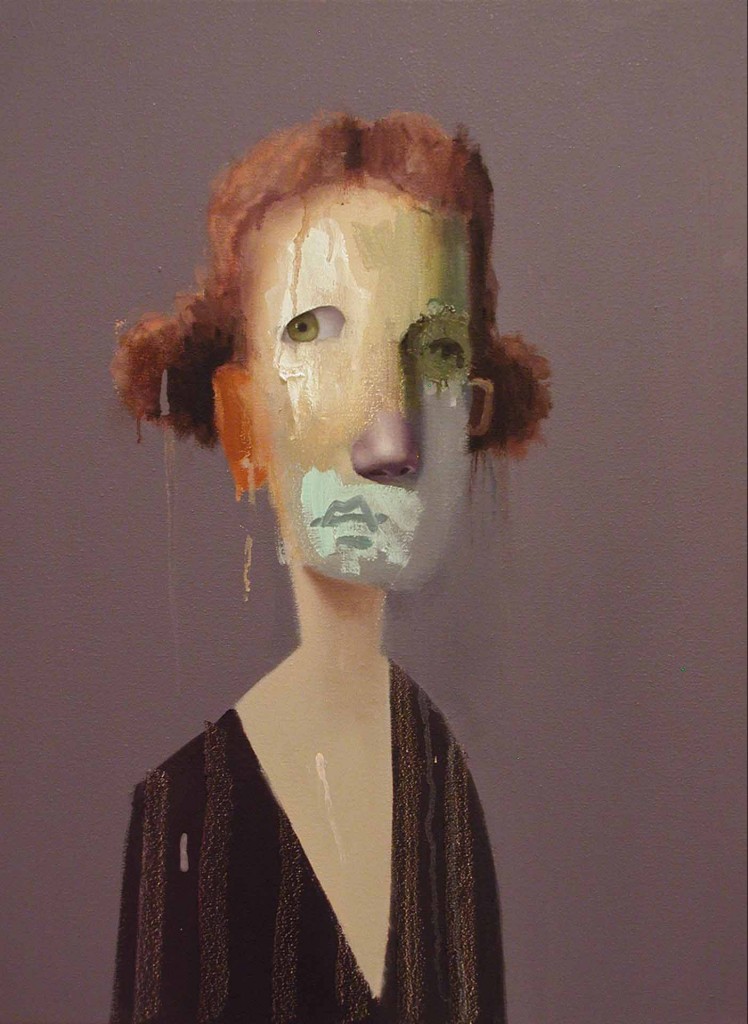 Kavi Gupta sold all of his Angel Otero’s, and Linda Warren, who might have the biggest and bad-assest installations in the Mart, unpacked paintings by Ed Valentine, one of my new favorites. Team Art! Chicago put each of their paintings on a literal chopping block, taking an ax to them if they weren’t sold. I saw a toddler in a stroller rescue a glittery puppy with only five minutes to spare, but by Sunday evening, Team Art’s walls were empty and shrapnel littered their floor.

OK, it wasn’t all tragedy. There was beauty and fun. Plenty to gossip about as well. Spencer Brownstone Gallery of New York showed copper and aluminum stretched coils by the great Fred Eerdekens. The shadows these twisted pieces of metal cast on the wall spelled cursive statements by the artist: “It disappeared / then it was gone / the space was left empty.” On another wall was “Run Run Run.” Both felt like decent parting words. Hebru Brantley’s “Selfish Little Jackass” could work too.

[…] Ryan Duggan’s Today, Tomorrow piece from our NEXT booth gets another shout out. Check it out. […]